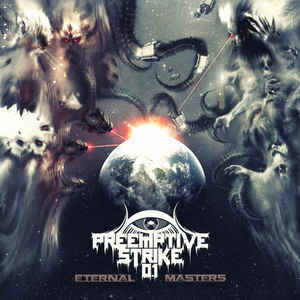 Background/Info: Pre.Emptive Strike 01 has left Infacted Recordings where they released 5 full lengths in between 2006 and 2015. “Eternal Masters” is an EP comparable to their metal experiment revealed on the EP “Pierce The Husk” released in 2014 on Sonic Hell Records.

Content: Is Pre.Emptive Strike 01 evolving towards pure crossover dominated by metal-sounding guitar riffs? The band is actually working on a new full length so the answer will be given within a few months.

“Eternal Masters” is a little less metal orientated than “Pierce The Husk” although it remains driven by furious guitar riffs. The main particularity of the work is that all the songs have been accomplished together with other artists, mainly active in the metal scene. Bands like Borgne, Wolfheart, Dominanz, Ered Wethrin, Eibon La Furies and Iperyt aren’t ringing a bell, but are probably more familiar and renowned artists in the metal scene. The songs remain however carried by dark-electronic arrangements so in the end we rather might speak about a fusion between two genres.

+ + + : Pre.Emptive Strike 01 is not repeating themselves, but simply exposes their fans to a new direction in sound. All the songs can’t convince me, but “Merciless Tyrant” for example is driven by a great electronic bass line reminding me of the Chemical Brothers. “Planet Eradicated” is another more electro-inspired cut and sounds pretty cool as well. The guitar playing is more reinforcing the global power of the production instead of moving into pure metal music.

– – – : I can’t get away from the idea that the best work of Pre.Emptive Strike 01 remains the pure dark-electro and EBM minded work. This EP rather sounds like an exorcism of metal influences they wanted to merge with their own electronic sound.

Conclusion: Pre.Emptive Strike 01 goes metal again! It’s not bad at all, but it’s not my favorite side of the band so I can only, but encourage them to hold on their dark-electronic style.