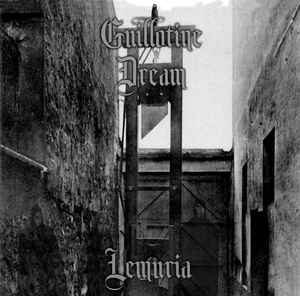 Background/Info: Guillotine Dream is a gothic formation that was originally set up in the 80s. They released a good-old cassette and next stopped their activities till they got reanimated after a long hibernation. “Lemuria” marks the comeback of the band.

Content: This mini-album brings us directly back in time awakening the 80s spirit of new-wave music. The music is characterized by real drums, dark bass lines, and typical mewing guitar playing reminding me of bands like The Sisters Of Mercy, The Cult and the Skeletal Family. On top of it all you’ll hear a singer with this typical deep timbre of voice making the songs pretty cavernous.

“Lemuria” moves in between calmer, moody pieces on one side and harder cuts on the other. Some passages are a bit more evasive-like and even move into psychedelic atmospheres. The final cut (cf. “Ghost Walk”) is a cool song in the genre, which will hold you in its grip for approximately 10 minutes.

+ + + : “Lemuria” is not exactly innovating, but reflects the true- and good-old spirit of new-wave music. The production is mature and clearly reveals experienced musicians who’ll bring the magic of the 80s back to life. I especially like both final cuts, which next to great guitar parts are somewhat excelling towards a truly climax. “Ghost Walk” is a great final track. Guillotine Dream has found the right balance between moody cuts and harder tracks.

– – – : I can’t say that “Lemuria” is hiding a real hit, but only a few cool songs. The new-wave sound doesn’t bring anything new to the genre and sounds a bit predictable.

Conclusion: The name of this band sounds as cold as their music and will especially please the new-wave lovers in search of hidden treasures in the genre.