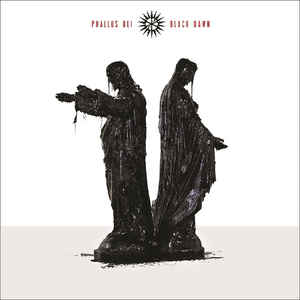 Background/Info: Phallus Dei is not exactly a band releasing new albums on regular basis although they remain a recognized and praised formation active in the wider fields of industrial and experimental music. “Black Dawn” is their first album since 2010 (cf. “A Day In The Life Of Brian Wilson”). Oliver St. Lingam, Mk. E and Richard Van Kruysdijk invited a few guest musicians to join in for this new work. The most familiar names are Merzbow and Legendary Pink Dots saxophonist Niels Van Hoorn, but they also invited a renowned jazz saxophonist and cello player Jacqueline Hamelink.

Content: The sonic universe of Phallus Dei remains a real unique experience mixing different influences with each other. This work takes off with some noise-like industrial sphere creating a sensation of terror while we progressively move through experimental fields revealing repetitive electronic sequences and cinematographic passages. The album mixes authentic instruments together with different kind of electronic sources. Sometimes accentuated by drones and next leading the listener into astral spaces, this work definitely covers a wide arsenal of styles and emotions.

+ + + : I like the visual strength emerging from multiple tracks. The dark and obscure ambient side is sometimes pretty close to soundtrack music and reaches the top on the final song “Stigmata”. Phallus Dei also confirms their open-minded sound approach, mixing genres and instruments together. I fully enjoyed this merge and especially the sound of cello. Last, but not least “Black Dawn” also stands for an overwhelming sound production. The heavy sounds resonate like a big bomber.

– – – : I noticed a few monotonous passages, which is due to the rather long duration tracks. “Black Dawn” only features 5 songs so I would have preferred a few more, but shorter cuts.

Conclusion: “Black Dawn” is not simply a comeback, but the continuation of sound exploration by one of the most atypical dark bands from this underground scene.