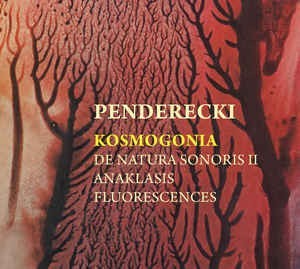 Background/Info: Krzysztof Eugeniusz Penderecki maybe doesn’t ring a bell although I’m “The Shining”, “The Exorcist, “Shutter Island, “Wild At Heart” or the latest “Twin Peaks”-series all are famous movies, but still great music compositions. Polish composer and director Penderecki is a recognized artist who originally released this “Kosmogonia” album on vinyl format in the 70s. The track “De Natura Sonoris II” was originally written for “The Shining”.

“Kosmogonia” has now been re-released and for the very first time on CD format and remastered as well.

Content: The four cuts of the album clearly are ‘classical’ pieces composed for an orchestra. The acoustic instruments and orchestral arrangements create a very unique dimension, but the main characteristic is rather experimental and abstract approach of the work. This is not ‘conventional’ cinematographic music, but clearly an experiment based upon bizarre atmospheres and epic chants.

+ + + : “Kosmogonia” is a move back to some ‘earlier’ work of  Krzysztof Penderecki, but it’s fascinating to realize how contemporary the work remains. I feel a bit like walking throughout a sonic labyrinth composed with an orchestra and driven by opera-like vocal parts. The walk is slow, but surely getting more mysterious and even a bit freaky. The epic arrangements reinforce the drama recovering the music, but in the end it all remains abstract. Penderecki has his very own style and I guess a very own perception of music, which might appeal for lovers of Luciano Berio.

– – – : The main point with experimental music is that it remains a less accessible music genre. It not only gives you the impression of a sonic labyrinth, but it’s one without an exit… you literally feel imprisoned in a strange music universe, which probably explains why Penderecki has been asked to composed the music for the aforementioned movies.

Conclusion: This is probably one of the most surprising productions released on Cold Spring Records, but at the other side it will also open new horizons for the label while it will for sure ravish music lovers in search of ‘cult’ movie soundtracks.