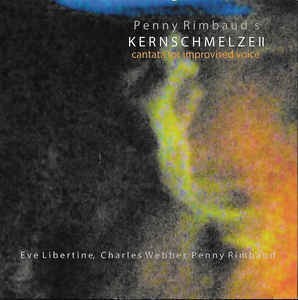 Background/Info: Penny Rimbaud (composer) and Eve Libertine (vocals and lyrics) will always be linked to the legendary punk formation Crass. Charles Webber helped them and co-produced the album, which has been introduced as a ‘cantata for voices’.

Content: The title of the work clearly says what it’s all about and you quickly get the impression this work has been composed around the vocals of Eve Libertine. She’s literally playing and experimenting with her vocals. From spoken like passages to overdubbed vocals to spooky extracts she’s mainly responsible for the global atmosphere hanging over this work.

The music simply reinforces the global sensation when listening to the 8 untitled cuts. Most of the tracks reveal a dark-ambient inspiration, but there also is a kind of fascination for noises.

+ + + : “Kernschmelze II” is probably not the most accessible opus, but it reveals a creative and intelligent process. The ‘cantata’ became an experiment on vocals, which simply injects the dark spirit in this opus. From ghost-like passages to ethereal parts, Eve Libertine did a diversified, but genius performance. She’s the soul of the album. But I also have to mention the great noise treatments featuring an impressive sonic canvas while mixing ambient- and industrial influences together.

– – – : It’s maybe a pity the tracks remain untitled. It should have given an extra dimension to the work.

Conclusion: If the vocals were improvised I can only, but affirm it’s a real successful experiment! It makes me think to a delicious cantata for witches.