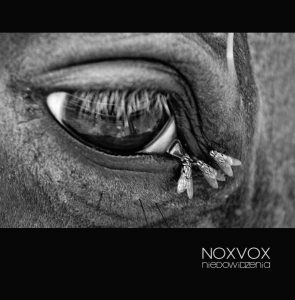 Background/Info: I didn’t find that much info about this ‘new’ Polish project, but it seems Rage In Eden was rapidly convinced to sign the band after having heard one single demo. The album has been accomplished with several guest musicians while multiple authentic (acoustic) instruments were used.

Content: I found out that the title of the album means ‘amblyopia’ in English, which is a disease of the eye. It probably explains the front cover of the album representing an eye (I guess of a horse) with some flies on it. I don’t see a link with the music, which is more into a cinematographic approach although mixed with neo-classic influences and other ethereal passages.

+ + + : “Niedowidzenia” is an album with endless sides and influences. Next to the aforementioned sources of inspiration you also will discover tracks with psychedelic elements and even one (great) song reminding me of Dead Can Dance. The acoustic instruments inject a real spirit into this work, which together with the vocals create a delicious symbiosis. But all the songs aren’t featuring vocals so you there will discover another approach and different influences. The album can suddenly move from reverie into dark and deadly parts.

– – – : The mixture between all influences is sometimes maybe a bit too exaggerated. I’m missing some coherence between the tracks, creating the impression of a compilation instead of an album from a band.

Conclusion: Noxvox has shown great music ideas and accomplished a few noticeable cuts. So no doubt about it, this band has a strong potential and I perfectly understand why they got signed, but the biggest challenge will probably be to catch the attention of the listeners with such a diversified production.

Since you’re here … … we have a small favour to ask. More people are reading Side-Line Magazine than ever but advertising revenues across the media are falling fast. And unlike many news organisations, we haven’t put up a paywall – we want to keep our journalism as open as we can. So you can see why we need to ask for your help. Side-Line’s independent journalism takes a lot of time, money and hard work to produce. But we do it because we want to push the artists we like and who are equally fighting to survive. If everyone who reads our reporting, who likes it, helps fund it, our future would be much more secure. For as little as 5 US$, you can support Side-Line Magazine – and it only takes a minute. Thank you. The donations are safely powered by Paypal.
Tags: Eden, Noxvox