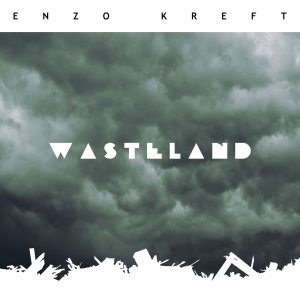 Background/Info: Enzo Kreft (real name Eric Vandamme) is a Belgian artist who started his music activities and who after a long break is getting back to music for a couple of years now. He struck back with a retrospective album plus a new album. “Wasteland” is his newest opus, which has been self-released.

Content: “Wasteland” is comparable to the previous full length “Turning Point” and yet there’s a noticeable evolution in sound. Next to the electronic minimalism, which often reminds me of Fad Gadget, the new songs are more into a new-wave tradition mixing electronics and guitar. The composition remains carried by the 80s spirit featuring pure vintage sound treatments, but “Wasteland” definitely shows another side of Enzo Kreft.

+ + + : First of all I’m a huge fan of this artist’s DIY attitude. It reminds me of the real spirit of the 80s and Enzo Kreft definitely is a ‘child’ from that decade. But I also remain fascinated by the artist’s artistic creation, mixing different elements resulting in an offspring between minimal electronics and more classical new-wave. Some of the songs make me think to Fad Gadget meeting The Neon Judgement. Another noticeable aspect consists of the vocals production, which sounds more diversified and sophisticated.

– – – : I’m missing the minimalism of “Turning Point”, which was more explicit and more unique. “Wasteland” is probably a bit more accessible covering a wider spectrum of influences.

Conclusion: There are artists who are emulating the 80s and you’ve artists such as Enzo Kreft who simply belong to the true spirit of the 80s. “Wasteland” is a well-crafted piece of music, which I’m sure, will find its audience in the underground scene.