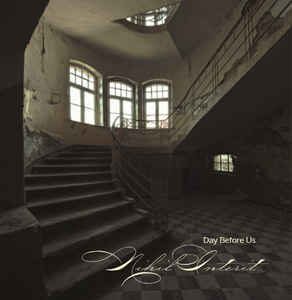 Background/Info: French composer Philippe Blache has already been active for 6 years now under the Day before Us moniker. He seems to be a prolific artist who already released numerous productions. “Nihil Interit” was already released some months ago now. Four songs have been sung by guest vocalist Natalya Romashina.

Content: The instrumental compositions are especially leading the listener to visit a dark-ambient sound universe, which is closely related to cinematographic music. The music perfectly fits with the artwork creating a sensation of solitude. The songs together with Natalya Romashina are different and more into an ethereal approach. She sings in a high and angelic way while also experienced with the French language for a poem.

+ + + : “Nihil Interit” is a well-crafted composition, mixing different sources of inspiration, sometimes creating a duality. It’s an album with a strong visual appeal and that’s probably what explains the cinematographic impression. With some fantasy you can imagine yourself walking in the pictures of the artwork symbolizing loneliness and despair. Both opening cuts are little sonic jewels with cool electronic treatments and overwhelming atmospheres. Other cuts also feature experimental passages and other field recordings.

– – – : After a strong debut the final cuts are missing some cohesion and especially a true climax. That’s one of the single regrets about this work.

Conclusion: The title of the album means ‘everything changes’, but my only advice to Philippe Blache is to hold on to this sound formula! This is a fascinating work and I get the impression Day Before Us can even do better.

Tags: Day Before Us