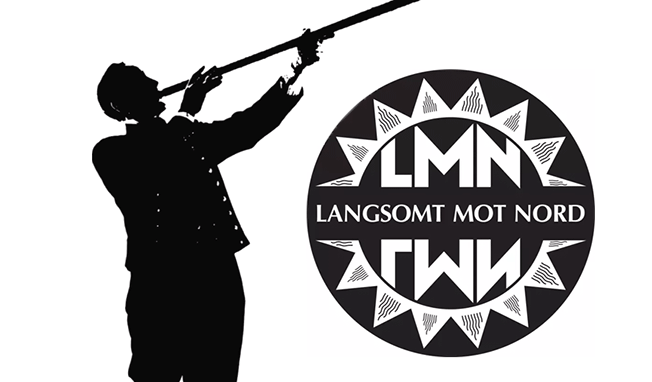 Langsomt Mot Nord (Slowly Toward (the) North/Slowly Northward, LMN) was a Norwegian synth/folk project that released three albums between 1985 and 1991. The main force behind the project is Ola Snortheim, a seasoned drummer and musician who’s been a member of a dozen Norwegian bands over the last four decades, and also the only permanent member of LMN. For each of the three albums he’s been joined by a main collaborator and a wast amount of guest singers and musicians.

With the help of publisher Christer Falck they’re now crowdfunding a vinyl box set of all their three albums in remastered versions, and a bonus album called ‘Far’ (Father), containing original tracks from Ola’s father, the Norwegian folk musician and Olav Snortheim.

I met with Ola and Morgan Lindstrøm, main collaborator on ‘Westrveg’, the second album.

Side-Line: First, what initiated this project back in the 80’?

Ola: I had grown a bit tired being in the background as a drummer in various band, backing up a vocalist who’s getting all the attention. I’d also played in De Press, which was in borderline of the folk-rock genre, so I was already going somewhat in that direction. Playing “ordinary” folk-rock wasn’t interesting, many bands sounded alike and boring, but doing it in an unique way, more instrumental, was something I wanted to pursue.
We started with my father’s recordings from the 50-60’s, laying new instruments and orchestrations on top them, making something new and updated with traditional tunes, resulting in the first album ‘Langsomt Mot Nord’ (1985).

This album got the project in the national spotlight, and they went on doing several TV-appearances, like this from 1985 with Kjersti Bergersen on vocals. 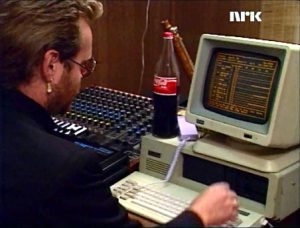 S-L: Why a new collaborator for each album?

Ola: It was just the way it happened…
Morgan: Originally Jørn (Christensen, collaborator on the first album) was meant to make all albums with Ola, but he got busy with other projects and the universe pointed towards me.

Ola: And after ‘Westrweg’ (1988) I wasn’t sure I’d make another LMN album. Then I met Espen (Beranek Holm), he was eager to contribute, and we ended up making the third album together – ‘Hildring’ (1991). We sat on the master tape for the album for two years after finishing, thinking it wasn’t interesting enough to pitch to major labels.

Instead they did several live shows, and in 1991 they were approached by the record company Origo Sound who aimed for the instrumental market. With a master tape ready for publishing it was an easy decision to say yes.

S-L: 30 years after the first album, what trigged the remastering and box set idea?

Ola: My first reason for remastering was to get the album out on streaming services. But then Christer Falck called me, wanting to release a Circus Modern triple box, which was another project I also wanted to prepare for streaming.  I grabbed the chance and said I also wanted to remaster and release the LMN album, and this way several things fell into place!

Morgan: We’ve been trying to release ‘Westrveg’ digitally for years, but Sony Music wasn’t very cooperative until now, not wanting to pay for remastering.

Ola: When we’re doing this the crowdfunding way with the help of Christer, the remastering costs goes into the project.

Morgan: … but the remastering job is almost for free anyway, that’s how we can do it. A real Norwegian “dugnad” (voluntary work)!
The most satisfactory part of this remaster project is making it sound how we wanted in the first place. We didn’t have the people or technology at the time when we made the albums to produce the kind of electronic music we wanted, now we do!

Ola: We even added some new synths on some tracks, added some depth and bass etc.

Morgan: Ola and I spent about six month prepare all the music in Cubase at my studio, using advanced processing gear and virtual synths, and the finalizing of the mastering process was done by Hugo Alvarstein.

Ola: I also want to add some background to the bonus LP in the box, called ‘Far’: My father, Olav Snortheim (1911-1988) was a folk musician and artist, with a natural gift to acquire great skills on any instrument. He travelled a lot inland as well as abroad, with a self-made suitcase full of instruments  – langeleik, bukkehorn (ram’s horn), lur and flutes, in addition to his small harmonica in his pocket. He sang, played and told stories, on a practically eternal tour in the 1950s, 60s and 70s. He even joined us on stage for a TV show in 1985.

S-L: Any other plans in the future besides the vinyl box?

Ola: Maybe we’ll do a CD box too, and even if the crowdfunding doesn’t get completed we’ll get the albums streaming anyway.

Check their YouTube channel for some of the remastered songs, and join the crowdfunding project here!
https://www.indiegogo.com/projects/langsomt-mot-nord-samleboks#/

Since you’re here … … we have a small favour to ask. More people are reading Side-Line Magazine than ever but advertising revenues across the media are falling fast. And unlike many news organisations, we haven’t put up a paywall – we want to keep our journalism as open as we can. So you can see why we need to ask for your help. Side-Line’s independent journalism takes a lot of time, money and hard work to produce. But we do it because we want to push the artists we like and who are equally fighting to survive. If everyone who reads our reporting, who likes it, helps fund it, our future would be much more secure. For as little as 5 US$, you can support Side-Line Magazine – and it only takes a minute. Thank you. The donations are safely powered by Paypal.
Tags: Christer Falck, Espen Beranek Holm, folk music, Jørn Christensen, Langsomt Mot Nord, Morgan Lindstrøm, Ola Snortheim