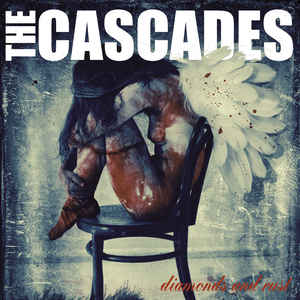 Background/Info: German formation The Cascades saw the daylight in 1988 (!), but it took them years to release their official debut-CD (cf. “Nine66”) in 2001. The band was driven by the spirit of front man Markus Wild who left the band in 2006 and started to release music under his own name. He was replaced by Ben Richter for the last album of the band (cf. “Something To Happen”), which was released in 2016 (ten years after the previous opus).

“Diamonds And Rust” saw the original singer joining in again to release a kind of ‘best of’ (on the first disc) plus rare- and demo tracks (on the second disc). The album also features 2 new cuts.

Content: Both new songs open the first disc. The style and influences of The Cascades directly emerge at the surface. This is what I would call a typical and experienced gothic formation driven by dark and captivating guitar playing and Markus Wild’s deep timbre of voice. The songs are awakening memories bringing us back to The Mission and The Sisters Of Mercy. Most of the songs have been sung in English, but you also will discover a few German cuts.

The second disc is quite different, but an interesting bonus for the fans. The songs are more diversified, sometimes into post-punk music. I also noticed a clubbier track driven by electronic arrangements and kick.

+ + + : Even if the Cascades didn’t become an international recognized formation, this ‘best of’ is an absolute must have. The band isn’t reinventing gothic music, but the songs are simply well-crafted and fully accomplished. The composition is powerful, carried by impressive guitar parts, a great and charismatic singer plus cool electronic arrangements. The first disc features a succession of great songs. The artistic digipak of the album is also a nice little extra, which means much more than discovering this album on streaming platforms.

– – – : Both new cuts aren’t exactly the best work I’ve heard from The Cascades. The second disc is nothing more than demo material, which however features a few cool cuts, but which can’t compete with the higher level of the first disc.

Conclusion: “Diamonds And Rust” is not only a great retrospective with some extra material, but it also seems to announce a new start for The Cascades.