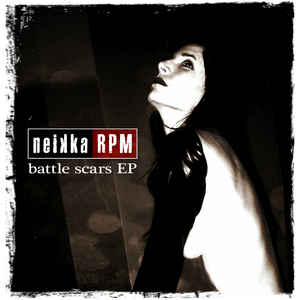 Background/Info: New-York duo Neikka RPM are back on track unleashing their first new studio work since the third album “Chain Letters” (2011). They indeed got featured on several compilations since 2011, but “Battle Scars” is the real start of a new chapter in history of Richard (music) and Dominique (vocals).

Content: Neikka RPM strikes back with one of their hardest songs in history. The title track holds onto the familiar and unique hard industrial electro-sound formula Neikka RPM has used to compose, but it simply becomes harder, more tormented and still clubbier. Dominique’s voice is no longer sensual, but more bewitching. Richard is experimenting with noises while the hard, bombastic kick rapidly gets you into a frenetic dance. Remixes of “Battle Scars” were made by Xotox and Cut_Off Sky.

The B-side cut “Deep Dive (All Your Devils)” is somewhat experimental and more fragmented although easily recognizable. The blasting sound waves are overwhelming here. M.O.D. did a more explicit club-remix of this song.

+ + + : If you like Neikka RPM or not, one thing is for sure, this band always has composed a very personal sound mixing multiple elements with each other and carried by heavy, bombastic rhythms. The sensual vocals of Dominique have been also very typical, but together with the sound it now all becomes darker, harder and more beleaguered. Neikka RPM remains faithful to their familiar sound, but just accentuated the pressure. Both new songs are worthy of examination and both could have been title tracks.

The remix of Xotox is an interesting choice, but the work accomplished by Cut_Off Sky and especially M.O.D. is amazing and will get you into dance moves.

– – – : Neikka RPM has never been the most familiar and successful band from the wide Alfa Matrix roster. Maybe they’re composing ‘difficult’ music and that’s not different on “Battle Scars” so I think it’s time now for this band to step into the spotlight.

Conclusion: “Battle Scars” is a surprising and successful return from Neikka RPM. This EP is a real hot teaser for the upcoming album revealing a band that has empowered their initial sound; definitely one of their best productions to date!

Since you’re here … … we have a small favour to ask. More people are reading Side-Line Magazine than ever but advertising revenues across the media are falling fast. And unlike many news organisations, we haven’t put up a paywall – we want to keep our journalism as open as we can. So you can see why we need to ask for your help. Side-Line’s independent journalism takes a lot of time, money and hard work to produce. But we do it because we want to push the artists we like and who are equally fighting to survive. If everyone who reads our reporting, who likes it, helps fund it, our future would be much more secure. For as little as 5 US$, you can support Side-Line Magazine – and it only takes a minute. Thank you. The donations are safely powered by Paypal.
Tags: dive, EBM, Neikka Rpm, Xotox