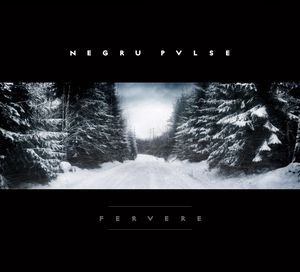 “Fervere” invites the listener to join in for a nihilistic soundscape built up with dark, humming sound waves. This work feels like the end of time, the point where you feel like you are joining a dark and dense space without return. We’re traveling through endless corridors of fright. This chilling sensation directly appeals for a strong visual interpretation. The title of the album is the Latin word for ‘to boil’, which also refers to alchemy. It injects an esoteric touch to the work, which is perfectly transposed into a poignant musical exposure.

Nine untitled tracks will hold you in their grip. The work has been accomplished by icy soundscape waves and field recordings reinforcing a kind of cellar atmosphere. You sometimes get the impression of hearing the noise of a rotor while at the end of the work you’ll notice a kind of vague rhythm. This is an album you should listen using headphones to become aware of some background little noises in the background. It sometimes feels like not a lot is happening, but the subtlety all lays in the details.

Both last cuts are like an apotheosis revealing a more elaborate writing and especially heavier, distinguishable sounds and sequences. I’m referring to a chilling electro sequence running throughout the 8th track while the last cut evolves into a truly sonic mayhem joined by spoken samplings. “Fervere” is made of sound mystery and will bring the listener in front of a real enigma.

Conclusion: I can’t say “Fervere” is a fully successful work, but definitely the kind of opus that will appeal to lovers of freaky soundscape experiences.