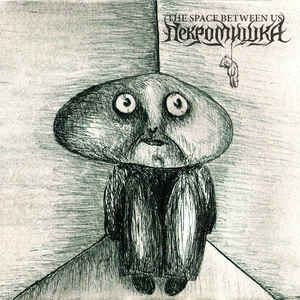 Background/Info: Necromishka is the meeting between Israeli musicians Michael Zolotov (Kadaver) and Tamar Singer (Zeresh, Cruel Wonders). This is the debut work from the duo, which has been released on 999 Cuts, which seems to be a small label run by Tamar singer. She indeed released the debut album of her Zeresh-project on 999 Cuts as well.

Content: The album takes off with a kind of imaginary sonic mist and that’s rather symbolic for the sound of this band. Necromishka rather sounds as the addition of influences instead of belonging to a real music genre. The ambient/soundtrack input seems to be one of their main sources of inspiration, but it’s now mixed and then alternated by a kind of apocalyptic rock and even neo-folk during the last part of the album. There are a few spooky vocals running through this work, but which are clearly secondary.

+ + + : Necromishka is a music fusion between different genres and that’s all because of the artists being each active in a somewhat different scene. It creates an interesting sonic exposure, which is mainly characterized by the now apocalyptic- and then neo-folk guitar. The last song entitled “There Is No Space Between Us” might be considered as the apotheosis of the work.  It moves crescendo reaching its ultimate point so there’s no better way to bring an album to a good end.

– – – : From a very personal point of view I think both last cuts are the most noticeable ones so it’s a pity there’s no more music in this vein featured at the album.

Conclusion: Necromishka features an easy listening work, which is nothing less than a crossover between different influences.

Best songs: “There Is No Space Between Us”, “Harm’s Way”, “Excelsior”.