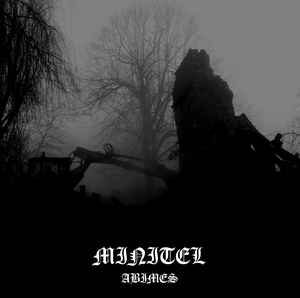 Background/Info: Minitel is a French solo-project set up by Raphaël Henry. This artist has some experience in the wider fields of metal music and has now moved into dark-ambient fields. Notice by the way that “Abîmes” was already released one year ago.

Content: This album features 5 tracks and 2 sides. The opening- and final song are carried by dark-ambient atmospheres, noise waves and drones. The 3 tracks left reveal a different aspect, which is more into cinematographic passages. The common element between all cuts remains the dark sound creation, giving you the feeling of getting lost in an obscure, abyssal voyage.

+ + + : I have a real preference for the heavier cuts exposed right at the beginning and the final track. This is a heavier and tormenting style accentuated by drones. The other cuts are more into soundscape and sonic nightmares creates with progressive noise waves and industrial guitar playing.

– – – : I think this band more excels in the accomplishment of heavier industrial & doom mixed with drones than the more familiar and sometimes monotonous soundscapes.

Conclusion: “Abîmes” is not reinventing any music style, but is a rather promising debut from an artist who seems to feel comfortable experimenting with different styles. This is an artist to keep an eye on.

Since you’re here … … we have a small favour to ask. More people are reading Side-Line Magazine than ever but advertising revenues across the media are falling fast. And unlike many news organisations, we haven’t put up a paywall – we want to keep our journalism as open as we can. So you can see why we need to ask for your help. Side-Line’s independent journalism takes a lot of time, money and hard work to produce. But we do it because we want to push the artists we like and who are equally fighting to survive. If everyone who reads our reporting, who likes it, helps fund it, our future would be much more secure. For as little as 5 US$, you can support Side-Line Magazine – and it only takes a minute. Thank you. The donations are safely powered by Paypal.
Tags: Minitel