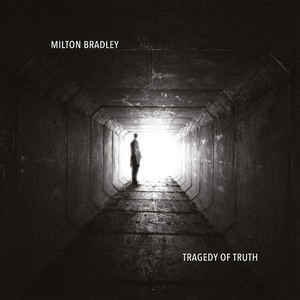 Background/Info: Milton Bradley (real name Patrick Radomski) is a Berlin-based producer who’s already been active for couple of years now. He accomplished an impressive number of EP’s, which were mainly released on his own label Do Not Resist The Beat! “Tragedy Of Truth” is the first full length album, which is available on digital format and vinyl as well.

Content: Milton Bradley is a great discovery in the wider fields of techno music. And here again it’s not the ‘classical’ techno producer, but a real talented artist who’s taking care to create something apart from the techno mass. The compositions are definitely into techno music, but it all sounds pretty minimal and alternative.

The work explores darker technoid fields, which are supported with mysterious and chilling atmospheres. It’s a bit experimental and pretty ambient as well. “Tragedy Of Truth” sounds a bit like the point where techno music moves into spooky atmospheres. The production reveals several cool sound effects and a real overwhelming production of sounds and subtle minimalism.

+ + + : This is techno music from another dimension and with a high level of artistic creation. I like the dark and pure underground approach carried by a real high-tech production. The album also reveals many outstanding tracks.

– – – : I can imagine this is the kind of techno genre, which is not accessible for the usual techno audience.

Conclusion: Milton Bradley has accomplished a true masterpiece. “Tragedy Of Truth” belongs to the most artistic and intelligent formats of techno. This artist is a truly sonic guru.

Best songs: “Spiral Of Silence”, “Tragedy Of Truth”, “Catching The Scent Of Melancholy”, “On The Edge Of Forever”.

Since you’re here … … we have a small favour to ask. More people are reading Side-Line Magazine than ever but advertising revenues across the media are falling fast. And unlike many news organisations, we haven’t put up a paywall – we want to keep our journalism as open as we can. So you can see why we need to ask for your help. Side-Line’s independent journalism takes a lot of time, money and hard work to produce. But we do it because we want to push the artists we like and who are equally fighting to survive. If everyone who reads our reporting, who likes it, helps fund it, our future would be much more secure. For as little as 5 US$, you can support Side-Line Magazine – and it only takes a minute. Thank you. The donations are safely powered by Paypal.
Tags: Milton Bradley