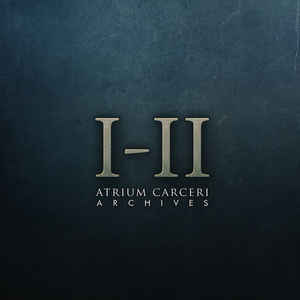 Background/Info: I no longer have any doubt about Simon Heath’s main addiction! He’s a great work-addict who’s non-stop composing music under multiple monikers and releasing a lot of productions on his own label. On the other side this album is not entirely ‘new’ as it consists of tracks that were originally written in between 2005 and 2015. This is a selection of ‘B-side cuts, forgotten tapes, tracks that for one reason or the other did not make it onto one of the Atrium Carceri albums, or tracks that were in circulation but needed a remaster.’

Content: The main specificity of the work is that each album features several cuts that have been put together. This way you get a long duration piece on each disc. This is without a shadow of a doubt the most atypical Atrium Carceri album to date. It all sounds like compositions that are exploring a wider spectrum of influences and not only the usual dark-ambient genre.

Next to the familiar dark-ambient elements spiced up with field recordings revealing a strong and brilliant visual appeal, this work also features more electro-minded passages, which are sometimes into pure IDM.

It’s a weird, but exciting piece of music on which Heath switches from chilling, apocalyptic parts empowered by heavy sound blasts and resonating drones towards minimal electro arrangements carried by slow rhythms. This is a match between heavy bombast and frightening sonic waves on one side and a surprising electronic composition on the other. And even the pure ambient sound reveals ‘warmer’ and even pure dreamy passages.

+ + + : No doubt about it, this is the most open-minded Atrium Carceri work to date. I especially like the electronic eclecticism of this artist featuring an exciting IDM-minded approach. The more classical dark-ambient basis remains overwhelming and visual.

– – – : The main strength of the work probably is the main point that will maybe hurt some dark-ambient die-hard fans not used to hearing Atrium Carceri experiment with slow, danceable rhythms.

Conclusion: I was a bit afraid discovering some meaningless and forgotten tracks, but “Archives I-II” is really hiding a few little treasures. The way the different tracks have been mixed together creates a cool soundtrack effect.