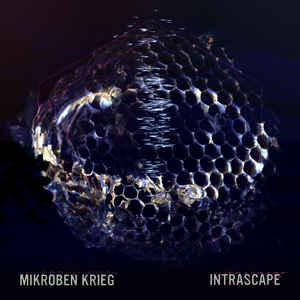 Background/Info: Portuguese formation Mikroben Krieg is back on track and it’s already been a while since I’ve heard something from this formation. Set up in 1995 Mikroben Krieg already released several productions –mainly in their homeland. They now joined hands together with Canadian label Crime League to release this EP, which is more a mini-album featuring 6 songs.

Content: “Intrascape” is a rather diversified piece of work, which however seems to be focused on a cinematographic composition. It’s an electronic work that has been accomplished with multiple elements such as industrial bombast, faster and somewhat d’n’b rhythms, darker and intriguing sequences and this constant ambient side. Some passages are characterized by refined treatments.

+ + + : “Intrascape” stands for evasion. You get the impression watching a movie or simply images that are passing by. It therefore is a work with a visual appeal and maybe the deepest ambient experiment ever worked out by the band. But it’s more than simply ambient and cinematographic music. Mikroben Krieg also likes to experiment with a wide sonic spectrum leading them to d’n’b minded rhythms and other electronic manipulations. “Mind Metric” definitely sounds like the ultimate experience in electronic ambient.

– – – : From very personal point of view I think it would have been interesting experimenting with some vocal parts. I now get the impression that I’m missing an element to speak about a fully successful experiment.

Conclusion: Mikroben Krieg strikes back with a fascinating and original experience in sound, which has its place on the Crime League label, driven by Michael Morton (Displacer).