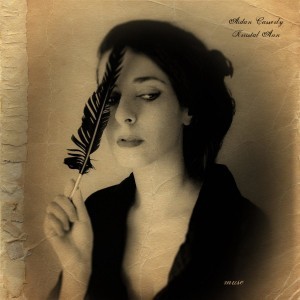 Background/Info: “Muse” resulted from the meeting between two artists hailing from different cultures, but sharing a common interest called ‘music’. Aidan Casserly is an experienced Irish artist while Greek artist Kriistal Ann is one of the hottest revelations of the past few years in electro-pop land. They both already performed a duet on a song of Glass Dancer (side-project of Casserly), but this is the very first time they work together on a common full length album.

Content: I expected a pop-inspired composition, but I got a jazzy inspired production instead. “Muse” for sure features pop influences, but the main inspiration is directed by elements of jazz and ballads. The numerous saxophone parts accentuate the jazzy side of the album.

The vocals of both artists are another main characteristic. Aidan Casserly has a somewhat androgenic timbre of voice while Kriistal Ann has a heavenly, but still cold accentuated timbre of voice. Together both are complementary and even create something magic.

+ + + : “Muse” is a surprising work, but first of all the meeting between two artists and two ‘voices’. The jazzy sound accentuates their voices, which aren’t that into jazz music –and especially Kriistal Ann’s timbre of voice. Both artists made no compromises and didn’t care about fashion trends, but did their own thing and that’s for sure a creative process.

– – – : “Muse” is not exactly the most classical pop-release and even takes a distance with traditional electro-pop anthems. There’s nothing wrong with that, but at the other side it’s not that typically jazz as well, but somewhere in between and that’s what makes it complex.

Conclusion: Aidan Casserly & Kriistal Ann walk on the jazz path and that’s their good right, but it will be hard to convince the classical pop lovers with “Muse’.