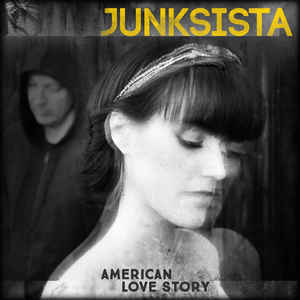 Background/Info: Boog and Diana S. are back on track and with a real special work. “American Love Story” is a kind of mini-album featuring 7 songs plus 7 remixes. “American Love Story” is the soundtrack the German duo scored for the award winning horror short film by talented director Timur Örge (“Mumukuba”). Boog and Diana S. got 6 hours to write a song and they simply did it (cf. “Gift”). The film director seems to have been so impressed with the song, he postponed the film and asked the band to write the complete soundtrack. This is what “American Love” is all about with some extra remixes on top.

Content: The opening cut is a reworked version of “Trust No Bitch” revealing an experimental approach. This minimalism is quite characteristic for the complete tracklist. Several influences are joining in. The songs move from dubby passages towards a kind of funky touch to pure wafting pop music. The songs have been accomplished by numerous effects and the now familiar sexy, whispering vocals of Diana. This work is not exactly into pure ‘dance’ vibes and feels like having been written for a special purpose like a film.

The remixes have been made by label mates Simon Carter, Kant Kino, Diffuzion, Avarice In Audio and Acylum while there also is a remix accomplished by Flesh Eating Foundation. There’s an interesting diversity in the remixes from the great industrial-pop vibes by Simon Carter to the tormented darkness by Acylum. Notice by the way that except a remix of “Rage” by Kant Kino all the other bands have remixed “Trust No Bitch”.

+ + + : Interesting concept and Junksista revealing a more minimal and experimental style. I can imagine this release is one of their biggest consecrations as most of the artists are simply dreaming of composing a soundtrack. “Trust No Bitch” remains a great song while Simon Carter one of the hottest artists when it comes to getting a pure dance remix.

– – – : Despite of the great concept and consecration, this is not the best work of Junksista. The experimental approach is somewhat ruining the power they have composed in the past. It sometimes more like a mishmash of influences upon an industrial-pop structure.

Conclusion: No doubt about it, Junksista remains one of the hottest revelations from the past years although this is not my favorite release of the band. It however reveals an interesting concept, which I think has to be discovered together with the film.