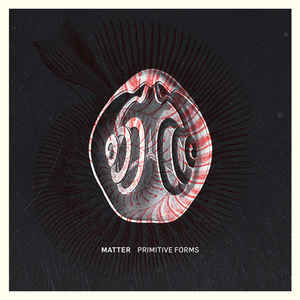 Background/Info: Italian artist Fabrizio Matrone set up Matter in 2001 and has released an impressive number of productions. This new opus is also his first work released on Ant-Zen and definitely an opportunity to gain a wider recognition. “Primitive Forms” is an appropriate title for a work inspired by an atlas about fossils and primitive life forms.

Content: This album is a remarkable illustration of ‘progressive’ industrial music. It has less in common with the origins of industrial music while it also takes distance with the power-noise trend. Matter creates an offspring between industrial and techno music. It sounds dark and transcendental. It might appeal for lovers of Monolith and related bands, but I think “Primitive Forms” goes further than those other bands. The songs also reveal a sophisticated writing process resulting in 10 great songs.

+ + + : I just mentioned the album features 10 songs and 10 is often symbolizing the number of the ultimate perfection. I don’t belief in perfection, but this album comes damn close! This is the most progressive side of industrial music or should I say the darkest side of techno?! Whatever you want to call it, the music is simply great and features multiple attention grabbers. But the writing and global sound production both are still amazing.

Conclusion: This is the sound of an industrial shaman who’ll bring you into trance quite instantly after the first tones. It’s not revolutionary, but definitely hot industrial music! This album could become my favorite one from 2018!

Since you’re here … … we have a small favour to ask. More people are reading Side-Line Magazine than ever but advertising revenues across the media are falling fast. And unlike many news organisations, we haven’t put up a paywall – we want to keep our journalism as open as we can. So you can see why we need to ask for your help. Side-Line’s independent journalism takes a lot of time, money and hard work to produce. But we do it because we want to push the artists we like and who are equally fighting to survive. If everyone who reads our reporting, who likes it, helps fund it, our future would be much more secure. For as little as 5 US$, you can support Side-Line Magazine – and it only takes a minute. Thank you. The donations are safely powered by Paypal.
Tags: Monolith