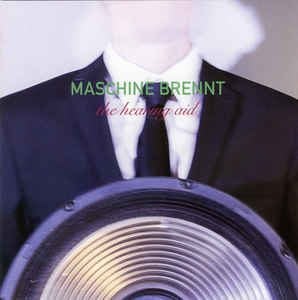 Background/Info: Swedish musician Joacim Thenander is a kind of electro-veteran. He’s already been involved in electronic music since the late 80s and has been part of bands such as Systema The Affliction and especially Cultivated Bimbo. Joacim started composing songs under the Maschine Brennt moniker during the 90s, but it took him a few more years before his music got released. Part of the ‘Plonk community’ and after some digital EP-releases, “The Hearing Aid” is his first official studio album featuring the 10 original songs released on digital format plus 4 bonus cuts for the CD-version released on Razgrom Music.

The bonus tracks are quite interesting as well for revealing older (90s) demo cuts. It reveals a more experimental approach in music.

+ + + : This kind of electro-pop music has something intelligent and more sophisticated than the average electro-pop standards. But the compositions also reflect some elegance in the writing and subtle arrangements. The shadow of Kraftwerk follows most of the songs although you can hear a more personal style in comparison with other bands dealing with a similar music style. I especially like the groovy and refreshing “Du Bist”. I also noticed another interesting cut entitled “1992”, which makes me think of a song written for a movie soundtrack.

– – – : The link with Kraftwerk-music remains clear and unavoidable. There are a few explicit Kraftwerk sound-passages, which for some will make the interest of this album and for others probably point to a kind of cheap copycat.

Conclusion: While there are thousands of Depeche Mode clones, the reactivated Kraftwerk hype features several interesting and cool bands. That’s a good reason to pay attention for Maschine Brennt.