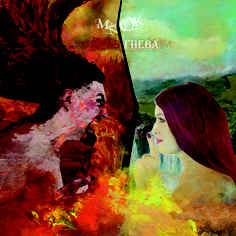 Background/Info: ManOK is a Ukrainian duo, which already released a first album in 2012 on Scentair Records.

Content: “Dies Irae” clearly deals with pop influences, which have been joined and accomplished by other genres like electro-wave, EBM and gothic music. I also noticed some folk-, neo-classic- and even cinematographic influences running through a few cuts. The male- and female vocals are all sung in the Russian language.

+ + + : ManOK clearly deals with a pop format you can’t directly link with another formation. The Russian language makes it very specific as well. I prefer the songs moving on the edge of body-pop music although the “Acoustic”-version of “В Эмпиреях”, which is more into soundtrack music, is captivating as well. The Hyperhate remix is a quite noticeable cut.

– – – : I can imagine ManOK is the kind of band that will get more recognition in their homeland and/or Russia instead of the world-wide electro-pop scene. I however think the album is missing some passion and especially highlights.

Conclusion: “Dies Irae” left me rather skeptical about the potential of ManOK although it’s an opportunity for electro-pop fans to discover a band from the Ukrainian scene.

Since you’re here … … we have a small favour to ask. More people are reading Side-Line Magazine than ever but advertising revenues across the media are falling fast. And unlike many news organisations, we haven’t put up a paywall – we want to keep our journalism as open as we can. So you can see why we need to ask for your help. Side-Line’s independent journalism takes a lot of time, money and hard work to produce. But we do it because we want to push the artists we like and who are equally fighting to survive. If everyone who reads our reporting, who likes it, helps fund it, our future would be much more secure. For as little as 5 US$, you can support Side-Line Magazine – and it only takes a minute. Thank you. The donations are safely powered by Paypal.
Tags: EBM, ManOK