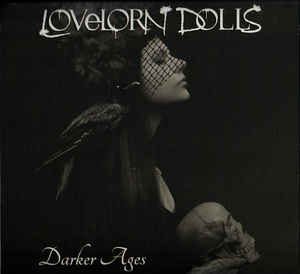 Background/Info: Time runs fast! There was a hiatus of four years between the previous Lovelorn Dolls album and their third opus “Darker Ages”. The Brussels based duo Kristell Lowagie (who last year released the debut album of her side-project Sin.Sin) and Corpus Christi joined hands with Maxx (Helalyn Flowers) for the production of this new opus.

Content: Lovelorn Dolls didn’t really seduce me with their debut album (cf. “The House Of Wonders”), but clearly awakened my curiosity on the next work (cf. “Japanese Robot Invasion”). “Darker Ages” moves on there where their previous full length stopped. The ingredients mixing gothic and rock music have been featured again, but the songs simply sound more mature. The elevating choruses and empowering guitar parts are in perfect harmony with each other while Kristell’s sweet vocals add a very sensitive touch to the work.

The extra disc takes off with a NIN-cover version (cf. ”Hurt”). We next get the usual amount of remixes featuring artists such as Helalyn Flowers, Restriction 9, Sin.Sin, Benjamin’s Plague ao.

+ + + : The vocals of Kristell remain one of the main strengths of this formation, but the balance between vocals and music has reached a higher dimension on this new work. The songs are well-crafted and I especially like this delicious contrast between the emotional and melodic side at one hand and the evil and guitar empowering side at the other hand. I like the symbiosis between all influences running through this work and which even touches ground with metal music at one side and pop music at the other side. There are several great cuts featured here! My favorite remix is the one by Restriction 9.

– – – : Having heard this album and with The Birthday Massacre in mind (as they’re definitely one of the best formations in this kind of music) Lovelorn Dolls is maybe missing just a little details to reach the top in the genre. Speaking for myself I expected a bit more from the remixes.

Conclusion: Lovelorn Dolls is a band that never stops improving themselves and that’s for sure what has resulted in a real great opus called “Darker Ages”.