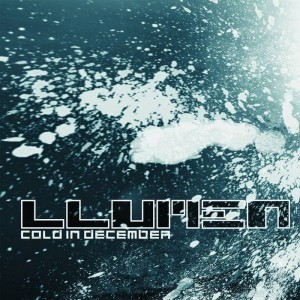 Background/Info: Llumen is the newest Belgian signing on Alfa Matrix. The band has already been active for a couple of years, becoming a solo-project driven by the creative spirit of Pieter Coussement. He works as an artistic researcher at the Institute of Psychoacoustics and Electronic Music of the University of Ghent (Belgium) developing new user interfaces and instruments for electronic music. Pieter Coussement transposed a part of this knowledge into his sonic creation called Llumen unleashing his official debut EP “Cold In December”.

Content: I discovered this artist on the latest edition of “Endzeit Bunkertracks”. This EP features 2 songs plus 8 remixes. Llumen deals with a styled and intelligent electronic format, which sounds like filling the gap between EBM and IDM. I instantly got the sensation of hearing a Belgian Haujobb. There’s a similar fascination for great sound sculptures made of little bleeps and great –and somewhat, space effects. The rhythm remains rather slow, but perfectly danceable. Coussement’s voice is quite captivating as well. He sings a rather clear way, but it’s still a bit whispering this way injecting a spooky touch to the work.

Six of the eight remixes have been made by label mates like Diskonnekted, Psy’Aviah and Implant for the Belgian colony and Aesthetische, Avarice In Audio and Simon Carter for the international guests. Propulsion and Super Dragon Punch! both Belgian formations as well have made a remix as well. I have a preference for the remix of “Lux Aeterna” by Aesthetische.

+ + + : Intelligent and danceable music revealing great sound treatments and overwhelming astral atmospheres. I like most of the remixes, which add diversity and danceable vibes as well.

– – – : It’s a real pity such a great EP is only available in a digital platform. This is the kind of production that deserves to be released on CD format as well.

Conclusion: Belgian has discovered a new sound alchemist called Llumen. This EP is a real strong teaser to await the debut full length.