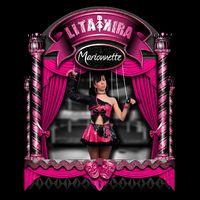 Content: Lita Kira is a band hailing from the Northern part of France.

Front lady Lita looks a bit like a puppet, which perfectly stands for the title of this EP; ‘marionette’ is the French word for ‘puppet’. This is the 2nd EP by the band, which clearly finds their inspiration in the French rock scene and I’m especially referring to the in France legendary Telephone. “Bien Mieux Sans Toi” will possibly remind you of Telephone.

But there’re other influences running through the work. The title-song is into pop-rock music and I here especially like the exploding chorus. Lita sings in French and has a rather efficient way of singing, which switches from time to time into passionate and somewhat enraged passages. She looks like a puppet, but she appears to be a little devil.

The EP also features quieter passages, which at “La Voix Des Larmes” moves a bit into a ballad style. This is not exactly the most convincing side of the band although I have to admit that “Ma Part Du Gâteau” is a cool song. I especially like the lyrics of this track, which sounds a bit like a kind of naïve poetry.

The best song is “La Plus Jolie Fille De L’Histoire”, which is much harder and exposing a punk-rock style with some real attitude. The chorus is well-crafted and empowered by some male choir parts.

Conclusion: Lita Kira is an artist who’ll first of all catch the attention in her homeland and other French speaking countries. She maybe will have to switch into English sung compositions to reach a wider audience.