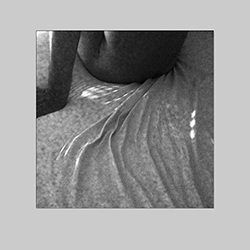 Background/Info: Stefan Leßner is A German DJ and producer active under the Less moniker. Several EP’s have been released and “Rosmarie” is the debut album (only available in a digital format). It’s a conceptual work inspired by themes such as longing, love, and sorrow.

Content: Less is not exactly what I should call a stereotypical techno producer. The work is strongly inspired and driven by techno elements, but it all remains pretty inhibited and spiced with ambient and experimental influences. “Rosmarie” is the kind of work, which will be accessible for a different- and I dare to say more demanding audience.

There’s an interesting exploration of sonic manipulations leading into acid passages and later on into vague trance parts. It always remains pretty minimal-like and still accomplished by dark blasts.

+ + + : “Rosmarie” sounds like an intelligence mix between different influences. I like the darker side and experimental approach of this work.

– – – : The experimental side is cool, but not always the most accessible part of the work. This is not an album, which will have an immediate impact.

Conclusion: “Rosmarie” reveals a nice cocktail of influences resulting in an intelligent piece of work.

Best songs: “You Are Gone”, “Behind Your Mask”.