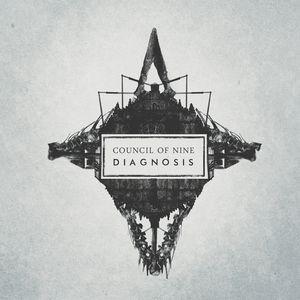 Content: 2015 will be for sure a special year for Council Of Nine. After the release earlier this year of the official debut-album “Dakhma” Maximillian Olivier is already back on track with a new opus featuring 7 tracks.

There clearly is a difference between both releases. “Dakhma” was more sophisticated in its writing revealing cool sound treatments and multiple noise details. “Diagnosis” clearly sounds more cinematographic-like and makes me think to an apocalyptic soundscape, which comes totally through at “I Can See The Fear In Your Eyes”. This title is also pretty symbolic for the global darkness throughout the work of this artist. This is for sure the common element between both albums thus far.

“Diagnosis” sounds like ‘infaust’ music leading the listener to go down into dark sonic realms of imaginary torture rooms and endless, haunted corridors. The work has been introduced as an intimate reflection, something psychological, which must for sure reveal the darkest corners of Olivier’s inner-self. It all has been transposed into oppressive ambient music driven by suffocating sound waves joined by intriguing field recordings. We’re progressively reaching a fictive state of terror, which is now and then reinforced by ghost whispers and other mysterious choir passages.

The first part is interesting, but not really adding something new. Things are really get interesting when you discover “Void Of Regret”. This is the real departure for a frightening ambient voyage leading you throughout humming sound vibes and subtle resonating, icy tones. This is for sure an element reminding me of the “Dakhma”-album and, which adds a personal touch to the work.

There’s an impressive and overwhelming sound canvas emerging from this work, which is embracing obscurity and horror. The epicenter of this chilling opus is reached at the ultimate chapter called “Fragments Of Myself”. This is an elaborated and intelligent piece of music revealing multiple sound treatments and noises.

Conclusion: Speaking for myself I prefer the “Dakhma”-album, but on the other side I think that “Diagnosis” is more diverse and still very dark. The final part of this album is absolutely great.

Best songs: “Fragments Of Myself”, “Riddled With Guilt”, “Void Of Regret”.

Since you’re here … … we have a small favour to ask. More people are reading Side-Line Magazine than ever but advertising revenues across the media are falling fast. And unlike many news organisations, we haven’t put up a paywall – we want to keep our journalism as open as we can. So you can see why we need to ask for your help. Side-Line’s independent journalism takes a lot of time, money and hard work to produce. But we do it because we want to push the artists we like and who are equally fighting to survive. If everyone who reads our reporting, who likes it, helps fund it, our future would be much more secure. For as little as 5 US$, you can support Side-Line Magazine – and it only takes a minute. Thank you. The donations are safely powered by Paypal.
Tags: Council Of Nine