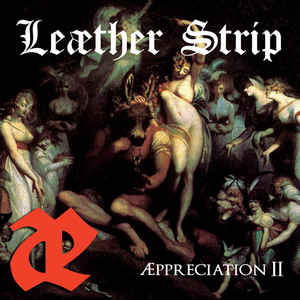 Background/Info: If you’re familiar with the work of Claus Larsen, you already knew the Danish master of EBM and dark-electronics likes to cover songs from artists he admires when he’s not writing new stuff for one of his numerous projects. He already accomplished numerous cover versions while the first volume of “Æppreciation” was released in 2014 on Emmo.Biz Records.

The selection is very eclectic, featuring different genres, but all transposed into the typical Leæther Strip-sound revealing the heavy, carrying bass lines and the darker sound treatments.

+ + + : There’s no doubt about it, Claus Larsen could tour and only play cover versions of famous songs. He has this power to rework the original versions into the familiar sound of Leæther Strip. Even if the songs are softer than the real Leæther Strip work, you can easily recognize the different elements of Claus Larsen’s approach. I also like the varied selection of songs and it’s quite fun to see this artist moving from Fad Gadget to Sex Pistols and from Marianne Faithfull to Coil. I’m not entirely convinced but I have to admit Claus did a great job covering “Anal Staircase” (Coil), “Holidays In The Sun” (Sex Pistols), “Beat My Guest (Adam & The Ants)”, Man In The Man (Dave Ball) and “You Spin Me Round (Dead Or Alive)”. The songs have been transformed with great sound treatments and recognizable melodies and choruses.

– – – : A few cuts can’t really convince me, but that’s probably because we all have our ‘sacred’ songs; tracks where it becomes a blasphemy when an artist dares to cover them! And even if I like the cover of “Tainted Love” by Marylin Manson, this song remains to me the best track from the 80s new-wave movement and I always will have some difficulties hearing this song covered. But at the other side I also have to admit covers are a way to keep songs alive and even let them discover to the new generation. Back to this album on, which I sometimes miss a little bit more passion in the vocals (like on “You Spin Me Round”), which makes me say that even an artist like Claus Larsen sometimes might be impressed when covering some of his personal idols.

Conclusion: I like this concept and especially when it’s accomplished with respect and devotion, but this album also reveals the humble side of the artist… when an idol is covering his own idols so in the end he remains a ‘fan’ just like all of us.