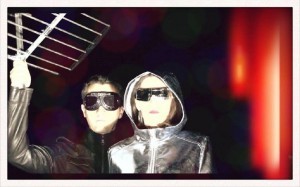 French synth-pop duo Foretaste is driven by the duo ‘Creature_XX’ (aka Sylvie) and ‘Creature XY’  (aka Pïerre). They’ve released an impressive number of EP’s and recently unleashed their fifth full length album “Space Echoes” on BOREDOMproduct. The new songs reveal a different approach in sound and arrangements, but remains pretty Foretaste-like. This is what the duo has to say about the new work and maybe sound direction…

Q: “Space Echoes” is your 5th full length album so what makes it different from previous releases?

Foretaste: A good definition for “Space Echoes” would be: ‘an intimate and personal work in a megalomaniac production.’ It’s also the first time that our label manager needed more than one listening to feel comfortable with our work!

Q: I indeed experienced “Space Echoes” as the most intimate Foretaste-work ever; I feel more emotion and especially melancholia running through the songs. Where does it come from?

Foretaste: We knew from the beginning that “Space Echoes” would be special. Special because it was the hardest one to write, to record and to finish. So when it became real, it was like a stranger gave us a very weird present… That was very strange. We wanted something very personal and we choose to do what we love and not what our fans would expect from us.

Q: The album has been clearly inspired by ‘space’, but what’s the deeper meaning and fascination behind this theme and what did you try to expose in the lyrical content?

Foretaste: We love human stories more than anything else and we wanted to write something about extreme loneliness and isolation. Ray Bradbury’s “Martian Chronicles” was a precious help because almost all of the action takes place at an emotional and psychological level. We felt in love with the very last words of that story when a family decides to stay on Mars because they feel more ‘martians’ than ‘humans’.

Q: The ‘space’ theme is an interesting one as I always have experienced your music as pretty space-like as well, which is probably due to the numerous little bleeps you’re using. How would you analyze your sound and its evolution all over the years?

Foretaste: Since “Love On Demand” we wanted to put aside our 80’ style and get a stronger sound. With “Space Echoes” we tried to forget everything we’ve learned. We mixed different machines and different technologies by using analog synths with a full virtual orchestra to get that special sound. We also changed  our way to write songs, without any limitation, to think out of the box was our leitmotiv.

Q: I noticed some symphonic-like arrangements running through this album. Is it something you tried to innovate and is innovation properly speaking an element you’re busy with?

Foretaste: When we started writing “Space Echoes” we decided that almost all songs had to be pre-recorded as orchestral versions. We tried to make something different during the production steps because we were afraid to lose all our fans but a few songs like “I Know Where To Find You”, “Every Shadow” and “Paradise Of Broken Hearts” were impacted by that orchestral work.

Q: Tell us a bit more about the realization of the clip “Lost In Space” and what did you try to express in the script of this clip?

Foretaste: We had the idea of a little boy dressed like an astronaut and playing with space toys. Our label manager at BOREDOMproduct talked about it to Mark Savage, an Australian film director based in the US. We already knew him because he is big fan of Foretaste and used one of our tracks in his latest film. Mark had the great idea to use 2 children representing us. They discover a new planet in a 50’ sci/fi style. We’re very proud of that clip.