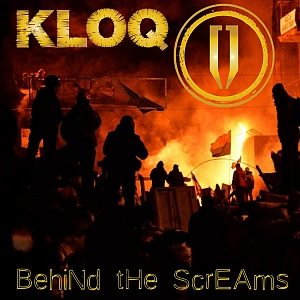 Background/Info: The 3rd full length album of Kloq is a fact. The band driven by producer Oz Morsley (founder of the legendary band Empirion) and completed by singer Dean Goodwin, guitarist Tim Jackson and drummer Chris Jacobs have decided to self-release their new opus.

Content: Kloq is a band, which doesn’t repeat itself and simply goes in search of a new challenge on every single new full length. They once started a pure techno-body style, but progressively moved towards a rock-minded approach with electronics treatments on top. “Behind The Screams” sounds this way as well, but is more electro-minded than the previous “Begin Again”-album (2013).

Kloq even moves back to the magic of breakbeats, which is a dynamic way to start off. The influence of The Prodigy hangs over the debut song, but quite progressively Kloq shows their own approach. Great electronic manipulations lead to heavy sound blasts. Oz Morsley is turning on the knobs of his equipment like mad. The sounds are irresistible and revealing a raw technoid texture. It sometimes evolves into a trance-minded break to move on with powerful drums and passionate vocals.

Singer Dean Goodwin again sings in a rather clear way. This guy has a unique timbre of voice and doesn’t necessary need all kinds of effects as a camouflage.

+ + + : This new album sounds like the offspring between the early Kloq sound for its technoid approach and the rock-touch of the previous work. The real bass playing adds a real dark and freaky touch, but the global production remains dominated by the magic of the electronics. I especially like the monstrous electro blasts, which can’t leave you unmoved.

– – – : This new album only features 8 cuts including the already familiar “The Gun” (previously released as EP title-song). I’m still convinced that Dean Goodwin is a real talented singer, but I sometimes get the impression his way of singing and the powerful sound of Kloq doesn’t always match. It makes the particularity of this band, but maybe also one of the only aspects making me a bit skeptical about the possible success.

Conclusion: You sometimes need to pick up the best elements from the past and mix them with ‘new’ ideas to create a successful sound formula. “Behind The Screams” sounds like filling the gap between “Move Forward” and “Begin Again”.

Since you’re here … … we have a small favour to ask. More people are reading Side-Line Magazine than ever but advertising revenues across the media are falling fast. And unlike many news organisations, we haven’t put up a paywall – we want to keep our journalism as open as we can. So you can see why we need to ask for your help. Side-Line’s independent journalism takes a lot of time, money and hard work to produce. But we do it because we want to push the artists we like and who are equally fighting to survive. If everyone who reads our reporting, who likes it, helps fund it, our future would be much more secure. For as little as 5 US$, you can support Side-Line Magazine – and it only takes a minute. Thank you. The donations are safely powered by Paypal.
Tags: Kloq