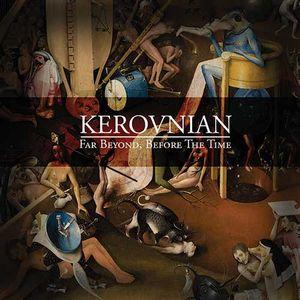 Content: Cold Spring Records is used to to take us back in time re-releasing long and sometimes forgotten albums. Kerovnian was set up by Vlad K during the late 90s. This musician was active in different metal project till he started Kerovnian.

“Far Beyond, Before The Time” was the official debut album released in 1999 by Cold Spring Records. This new version features the 6 original songs plus 4 extra cuts, which makes it quite interesting for those who already have the first edition of the CD.

The music reveals a meticulous progression, which always lead to dark passages sometimes reinforced by mysterious chants and low vibrating sound waves. Vlad K also adds multiple vocal parts, which are more like escaping from deep crypts. It injects a freaky and pure ghost-like sensation this way reinforcing the global dark & dead ambient character of the work. The title track is a genius piece that will possibly affect you. It’s a nightmarish experience and only the beginning of a deadly trip throughout tormented imaginary places.

Kerovnian appeals to our mind to visualize terror. He did by monstrous sound treatments, which feel a bit like entering into hell. “The Godless Keep” is a significant cut in the genre, which I’m sure, will not leave you unaffected. I’m also impressed by the sound manipulations running through this work. Vlad K is not only creating haunting sound atmospheres, but he also likes to decompose standard sounds to create something new and often monstrous. The music is filled with multiple details and field recordings. This sound gives a truly vitriolic sensation.

The extra songs at the end of the CD are much more than simply CD fillers. These songs have been composed in a similar vein, but are even better for their global impact. Some passages are more into ambient-noise while animated by freaky zombie-like growls with isolated drones resonating throughout your speakers. “Of Oblivion Undead” is a genius cut, but I also have to mention “Whisper My Defiled” composed with sharp, icy tones.

The bonus tracks appear to be even more elaborate while still exploring some noise fields while holding on to the poignant and terror-like ambient side.

Conclusion: This re-release is one more essential production and a great opportunity to (re)discover a brilliant album dealing with the darkest side of life.

Best songs: “Far Beyond, Before The Time”, “Before The Oblivion”, “Of Oblivion Undead”, “Whisper My Defiled”.