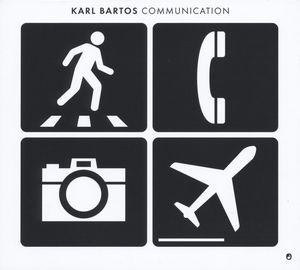 Background/Info: Karl Bartos entered into history as a Kraftwerk-member, but also as the one who left the band in the early 90s. He next focused on his own work as Karl Bartos and the Elektric Music. His first solo-album “Communication” got released in 2003 and rapidly became a fetish release of all ‘Kraftwerk-pop’ freaks. “Communication” has been now remastered and re-released on both CD and vinyl format. Notice by the way we also get a bonus song entitled “Camera Obscura”.

After the release of the original album Bartos said  ‘ “Communication” is about the way images shape our view of the world and how electronic media is going to change the contents of our culture’.

Content: If you know the original “Communication”-album you for sure have kept it in mind. Bartos accomplished a master-piece, which sound-wise remains pretty close to the sound and tricks of Kraftwerk. The sequences and magic analogue sweeps plus robotic treated vocals reflect this unique electro-pop sound that made Kraftwerk and Karl Bartos immortal. But “Communication” also reveals an explicit poppy style, which is accentuated by solid melody lines and catchy passages.

One of the most surprising elements remains the somewhat nu-disco effects running through “15 Minutes Of Fame”. This song was originally written together with Anthony Rother. It definitely is the most ‘commercial’ cut and one of my all-time Bartos’ favorites.

“Communication” takes us back to retro electronics, but with a refreshing sound on top. The album reveals a succession of great songs, which now belong to the collective memory of electro-pop. Songs like “Life” and “Ultraviolet” are a few brilliant exposures of this artist’s genius. The bonus song “Camera Obscura” totally matches with the global spirit of this work and is a real nice surprise for the fans.

+ + + : “Communication” is made of brilliant sound treatments and the magic of analogue equipment. The global production is a real reference for music lovers.

– – – : Some closed-minded Kraftwerk fans will maybe say that Bartos is only a copy of Kraftwerk, but let’s not forget he was a member of this legendary formation.