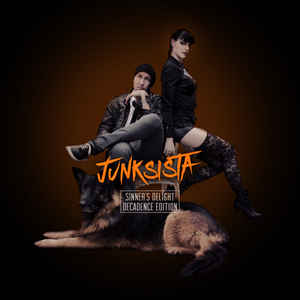 Background/Info: I thought Junksista had left Alfa Matrix, but the versatile German formation is now back on board with the ‘matrix’ unleashing this “Sinner’s Delight”. They originally self-released this EP last year featuring 6 new songs. We now get a ‘deluxe’ or ‘expanded’ version featuring 8 extra cuts (remixes). Notice by the way there are a strictly limited number of copies available on CD format (digipak).

Content: The new songs remain in the purest tradition of the German pop-punkers. The main question always has to define the real style of Junksista and the least I can say is that it’s a kind of modern punk mixed with pop, minimal electronics and technoid arrangements.

The lyrics remain funny, sexy and maybe a tiny bit provocative, but here again it makes all the charm of both Germans.

+ + + : Junksista remains to me one of the most refreshing electro-pop sensation from the past few years. They don’t really care about established standards and fashion trends, but are just doing their own thing! The new songs are really efficient and revealing a band, which is in constant move trying to reinvent their own sound. From EBM bass lines to technoid arrangements to minimal treatments and sexy female vocals with hot lyrics Junksista rules! I especially like the songs “Drug” and “8008”. If this work is sold as an EP, it rather looks like a mini-album with some extra remixes.

– – – : The remixes inject some diversity, but can’t unfortunately convince me! Except the somewhat dub-inspired remix by Max Gain, I definitely prefer the original versions of all songs.

Conclusion: Junksista is back on track, moving on with their totally provocative and sexy pop music. It remains a weird experience, but one that will get you into dance; great production for a great band!