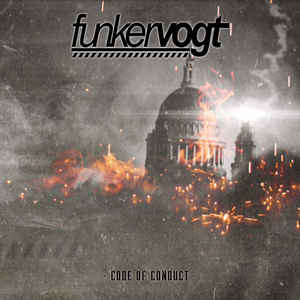 Background/Info: Funker Vogt is back on track unleashing their newest full length after years of artistic silence, but with serious commotion about their new singer. The new singer finally became Chris L. (Agonoize, Dance Or Die, The Sexorcist) while Gerrit Thomas remained the main operator behind the machines. Since their previous singer and in a way ‘image’ of the band Jens Kaestel left Funker Vogt, the fans were awaiting this new work for quite a long time. It also is the first ‘new’ studio album released on Repo Records, which already released work from Gerrit Thomas’s side project (Ravenous, Fictional, Fusspils 11) plus ‘deluxe’ re-edits from successful Funker Vogt albums.

Content: Sound-wise nothing has really changed. You instantly recognize the stamp of Gerrit Thomas in the danceable kicks, EBM structures, raw technoid sequences, melodic leads and the global power emerging from the songs. The main change of course is the vocals by Chris L. The new singer is an experienced and talented artist, but with a different timbre of voice so that’s for sure an important change.

Most of the songs have been sung in German, but you also will hear English sung cuts as well. The debut tracks are a bit hesitant, but quite progressively Funker Vogt is gaining in power while elevating the dance vibes.

There are some bonus cuts featuring a song together with Gary Wagner (Dance Or Die, Winterhart, Ruhestätte Schwarz), remixes by Rise Of An Empire plus Intent:Outtake and an extra new cut.

+ + + : I always have liked the work of Funker Vogt because they have a very personal sound you immediately can recognize. The sound hasn’t changed that much throughout the years and even if “Code Of Conduct” is not the band’s best album in history, it however features a few potential dancefloor songs. Speaking for myself I preferred Jens Kaestel’s timbre of voice, but we simply have to get a bit more familiar to the new singer. I especially like the vocals in English, but the main strength is the catchy lyrics (especially in the choruses). The choruses are well-crafted and accentuated by great leads. Somewhere in between dark-electronics and EBM this album stands for the resurrection of a great band and a new chapter in their history.

– – – : I haven’t been convinced by both debut songs, which are a little bit hesitant, but quite progressively the album gets better and better. I again have to say it’s not an easy thing to replace a great singer from one of the leading formations in their genre.

Conclusion: The song “Tanzbefehl” clearly says what Funker Vogt is all about: ‘Musik ist Krieg’ (‘music is war’)! And this work features a few sonic bombs!

Since you’re here … … we have a small favour to ask. More people are reading Side-Line Magazine than ever but advertising revenues across the media are falling fast. And unlike many news organisations, we haven’t put up a paywall – we want to keep our journalism as open as we can. So you can see why we need to ask for your help. Side-Line’s independent journalism takes a lot of time, money and hard work to produce. But we do it because we want to push the artists we like and who are equally fighting to survive. If everyone who reads our reporting, who likes it, helps fund it, our future would be much more secure. For as little as 5 US$, you can support Side-Line Magazine – and it only takes a minute. Thank you. The donations are safely powered by Paypal.
Tags: EBM, Funker Vogt, Technoid, Winterhart