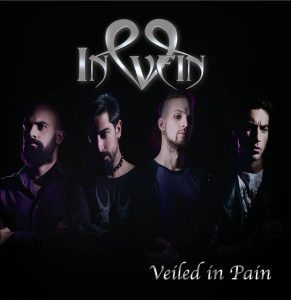 Background/Info: I never heard of In Vein before and unfortunately there’s not much information available. It starts to become really confusing when realizing there are different heavy-metal formations with the identical band name. But this band is from Greece and deals with gothic, metal and dark-rock.

Content: “Veiled In Pain” features 5 different songs, which mix the aforementioned sources of inspiration. The rock-goth style often reminds me of The 69 Eyes and that’s more than simply a reference. The electronic arrangements accomplish the production while adding a nice melodic twist with the harder guitar playing. The vocals are harsh, somewhat zombie-like and reminding me of gothic-wave artists. The last song is an acoustic version.

+ + + : In Vein hasn’t reinvented the word of goth-rock and metal, but their songs make sense. It’s an achieved work featuring cool songs and the brilliant “Die Again” is an absolute masterpiece. There’s an impressive progression running through this cut, which is also characterized by a guitar solo. The carrying choruses are elevating.

– – – : The acoustic song at the end is the only cut, which can’t convince me. It definitely appears to be the only minus point of this EP. This is the kind of band, which with a professional producer could for sure catch a wider attention.

Conclusion: In Vein is an interesting discovery and a band that perfectly knows how to compose alluring and captivating rock-goth-metal songs.