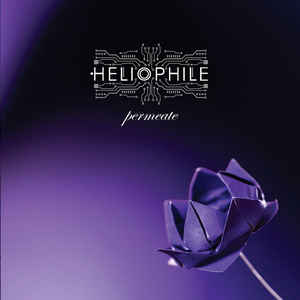 Background/Info: Heliophile is an electro-pop band from The Netherlands set up in 2010 by Gijs van Ouwerkerk. If the name of this artist doesn’t  ring a bell, you maybe have heard of Seven Waters, which is a metal band Gijs is involved with. But you for sure have heard of Scwarzblut, which released multiple productions on Alfa Matrix and, which deals with a mix of ethereal and dark-electronics. “Permeate” is the first official album released by Heliophile.

Content: This album sounds totally devoted to electro-pop. It’s mixing melancholic passages together with happy pop sequences. The songs are well-crafted and carried by great melody lines. One of the most noticeable cuts is the somewhat Kraftwerk-reminding “Meet The New You”. Another noticeable cut is “Tranen Van De Regen”, which has been sung in Dutch. It sounds unusual, but it’s an original song.

+ + + : You don’t really get the feeling to hear a debut album when listening to “Permeate”. The global production reflects an impressive maturity, which has been characterized by well-crafted songs, creative and refined arrangements, carrying melodies and captivating vocals. “Permeate” reveals a few guitar parts, but it first of all is a great electronic releases.

– – – : I can’t say that Heliophile is setting the electro-pop universe on fire; it’s quite an classical electro-pop production revealing a few mealy cuts.

Conclusion: The least I can say is that Gijs van Ouwerkerk is a musician from many talents. He’s involved with very different bands and seems to feel perfectly comfortable with varied genres. I have to say “Permeate” is a cool piece of music.