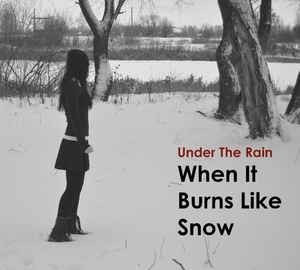 Background/Info: Under The Rain is a young band hailing from Lima (Peru). The main composer Daniel Guerra got some help from guest musicians and found his drummer in Spain. This self-released debut album clearly reveals the 80s influences of the band.

Content: Under The Rain sounds like a pure 80s formation. Joy Division clearly sounds as one of the main sources of inspiration although the sound of this Peruvian formation is not as dark. The guitar playing is one of the main strengths of the sound and an explicit reference to the dark 80s decade where new-wave music got his sources.

The main difference with a band like Joy Division is the somewhat enlightening and even evasive flavor hanging over the songs. A few synthesizer parts accentuate this effect of reverie. I also noticed a beautiful piano-like passage (cf. “Deep Green Eyes Under The Rain”) and a somewhat gothic-cabaret like apotheosis.

+ + + : Under The Rain perfectly emulates the magic spirit of the 80s and will for sure remind you of some legendary bands. The guitar playing is one of the most noticeable elements of the work. The already mentioned “Deep Green Eyes Under The Rain” is a beautiful and artistic composition.

– – – : Under The Rain doesn’t add anything new to a genre, which still features numerous copyists. Some of the songs in the beginning of the album are missing a kind of climax.

Conclusion: Under The Rain finds its inspiration in the golden years of new-wave music and will appeal for all nostalgic souls, but it still is an interesting debut album. Let’s keep an eye on this band.

Best songs: “Sitting In The Dark”, “Deep Green Eyes Under The Rain”, “Marie”.

Tags: Under The Rain