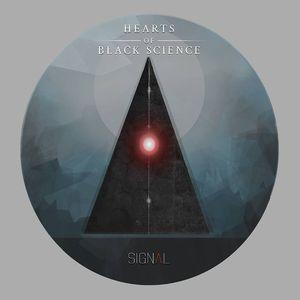 Content: Hearts Of Black Science is a name that rings a bell, and it’s already been quite a long time ago that I’ve known of this band. The album “The Star In The Lake” released in 2009 by Wonderland Records probably remains their main album before this ‘resurrection’ at Progress Production with the new full length “Signal”.

I can’t get away from the idea that this duo probably is one of the best kept secrets from the Swedish electro-pop scene. The sound is covering many influences, but ‘pop’ music remains the main basis to their composition. There’s a good-old vintage flavor emerging at the surface, which reminds me of legendary 80s bands like Simple Minds, Duran Duran, House Of Love and A Flock Of Seagulls. This retro-electro input has been meticulously mixed with pure dream-pop elements and the sensual vocals of Daniel Änghede. A few songs feature female backing vocals injecting an angelic touch like at “Wolves At The Border” featuring Heike Langhans. I can’t get away from the idea that Hearts Of Black Science have found the secret formula to reinvent new-wave music. It’s a contemporary format of new-wave, which sounds fresh and carried by an impressive production.

The songs reflect dreamy treatments and melodic passages. There are several beautiful and fully accomplished songs revealing a different approach and a wider range of influences. It’s not that easy to label this album to one particular genre. Hearts Of Black Science are pop chameleons bringing us a part of nostalgia –when referring to the aforementioned 80s bands, but still something new and modern.

The dark lyrical themes are enlightened by the beauty of the global production process. This work features many potential hits or at least songs that will immediately catch your attention for their great sound treatments and melodic aspect. This is a little pop treasure consisting of 11 songs.

Conclusion: I think this band can (thanks to their partnership with Progress Productions) really break through as it for sure is one of the most creative and well-crafted productions I’ve heard in months.

Since you’re here … … we have a small favour to ask. More people are reading Side-Line Magazine than ever but advertising revenues across the media are falling fast. And unlike many news organisations, we haven’t put up a paywall – we want to keep our journalism as open as we can. So you can see why we need to ask for your help. Side-Line’s independent journalism takes a lot of time, money and hard work to produce. But we do it because we want to push the artists we like and who are equally fighting to survive. If everyone who reads our reporting, who likes it, helps fund it, our future would be much more secure. For as little as 5 US$, you can support Side-Line Magazine – and it only takes a minute. Thank you. The donations are safely powered by Paypal.
Tags: Hearts Of Black Science