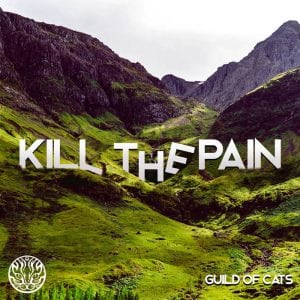 Background/Info: Guild Of Cats is a Swedish band which previously released a single. This debut-EP features 4 songs.

Content: Sweden has a great electro-pop tradition although Guild Of Cats sounds a bit different from the established standards in the genre. This band is not a new emulation from Depeche Mode or Kraftwerk, but sounds a bit more indie-like. The vocals are a bit inhibited, which also is quite different from the common electro-pop music. The songs are quite diversified; exploring different paths such as darker atmospheres recover one of the songs while the final track is more retro-like.

+ + + : I like the atypical approach of “Kill The Pain”. The music is not easy to seize although I like both sweet opening tracks followed by the darker “Alone In The Dark” and vintage last track “Liar”. The last mentioned song contains fine arrangements. The song is maybe more ‘classical’-pop like, but it’s definitely my favorite one.

– – – : “Kill The Pain” is a sweet and easy listening piece of music although I expect a bit more from the global production. Guild The Cats clearly try something different and that’s always a hard challenge.

Conclusion: You can feel that this band still has to find their own sound identity, but there are a few cool ideas running through the music.