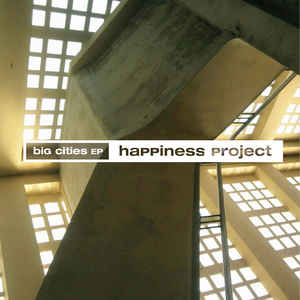 Background/Info: While the new full length album “Mutation” is announced for September of this year, French electronic trio Happiness Project has awakened from a long creative hibernation to unleash this new EP. The band is definitely one of the familiar bands from the French label BOREDOMproduction and can look back to some successful releases.

Content: “Big Cities” has been announced as the first step in a new sound direction, which will really come through on “Mutation”. I can’t really say to have heard ‘new’ things running through this work. It remains a styled and well-crafted electronic music with a real retro-feeling, which might remind you of Kraftwerk, and also Metroland for its more contemporary edit. You’ll notice robotic male vocals and cool female vocals. The bass lines (played by bass guitar) are solid and 80s like while good-old vintage sounds are achieving the work.

This EP features only new songs. Three of them have been remixed by the band and I’m sure the remix of the title song will definitely catch your attention for its great vintage sound.

+ + + : Happiness Project is one of those BOREDOMproduct bands deserving more recognition. They are really talented musicians influenced by the past, but accomplishing a contemporary and refreshing production. The songs have been crafted with great sound treatments, sophisticated arrangements and alluring bass lines. I already mentioned Kraftwerk and Metroland, but it’s the kind of EP that might also appeal for lovers of early Poésie Noire. I noticed a few potential hits on this EP so this is a real strong appetizer for the upcoming album.

– – – : I just noticed one single cut (cf. “Darkside Baby Doll”), which can’t totally convince me. This is what I would call an EP-filler, but believe me, there’s no reason to complain when you’ll hear the rest of the tracklist.

Conclusion: Happiness Project strikes back with style and with a great sonic accomplishment. There’s no better way to announce a new album than releasing one of their best maxis in history!