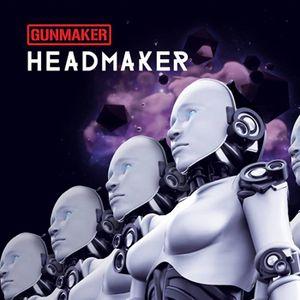 Background/Info: Behind this new Hungarian band is hiding ‘Gunhead’ who was previously involved in Impact Pulse and Nothing Nada. After the split of those bands Gunhead was joined by a female singer and a guitarist to set up Gunmaker.

“Headmaker” is the debut album, which was already released a few months ago now.

Content: This band has less in common with the aforementioned formations of their creator. The songs are clearly driven by empowering guitar riffs, which are somewhere in between metal and gothic music. The electronic parts are much softer and even exploring realms of pop music, which is the only link with Nothing Nada.

The result is rough exposure of pop, which is unusual and raped by heavy guitar play. This is an antidote for classical electro-pop music although accomplished by efficient arrangements. The female vocals by Zsófi add some angelic grace to this album.

The work features 8 songs plus 5 noticeable remixes. Gunmaker made an outstanding selection asking great producers and I here especially have to mention People Theatre and Rob Dust bringing the sound into great dance-pop music. I also have to mention a harder, but excellent remix by Dolls Of Pain.

+ + + : “Headmaker” is a pleasant debut featuring a surprising, but exciting mix of electro-pop and metal-guitar music. There are a few noteable remixes at the end of the album.

– – – : I always feel a bit sorry for a band when some of the remixes made by other formations are better than the original songs and that’s exactly what this album is all about. The potential hits have been accomplished by other bands instead of Gunmaker.

Conclusion: This is a new formation showing interesting ideas, which have been transformed into gold with the remixes by People Theatre and Rob Dust.