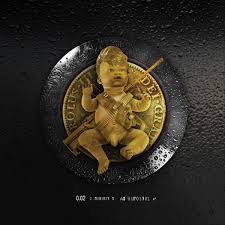 Content: GoFight is not exactly the most familiar name active in the scene and yet this band based in Chicago has been set up by singer/percussionist Jim Marcus (Die Warzau, Pigface ao). After a debut opus “Music For Military Torture” released in 2012 “Napalm Baby” features 12 new songs.

The opening cut sounds a bit in the EBM vein revealing a promising work. But GoFight are not just an EBM emulation. Their sound is more complex and filled with multiple influences, which makes me say it’s not that easy to define their music. There for sure is a part of EBM running through several songs, but there also is a kind of cyber-rock approach while other cuts are featuring some nu-disco like influences and even funky passages. I know it all sounds a bit weird, but this album is a kind of sonic chameleon.

If you really want to have an idea of what it all sound like, just listen to “Dirty Money.” It sounds a bit like good-old Armageddon Dildos going disco. It’s crazy and surprising, but probably a bit undone! But in the end it’s not bad at all. I can’t say I was convinced by the entire album, but there’re a few cool songs featured. “Rocket” is one of the noticeable songs for its EBM-rock mix while “Drop A Bomb” is a sensational apotheosis, which will make you dance. You here will notice the rather disco-like approach mixed with harder and somewhat industrial like elements.

“Napalm Baby” is something totally different and a real challenge. “Turn It Up” is another song illustrating the wide range of influences and the somewhat surreal sound. This song mixes elements of industrial- and disco music. I don’t know what kind of substances GoFight used to compose this work, but they really deserve a nomination for the most creative band in this scene.

Conclusion: “Napalm Baby” is an album that will move you. It’s a real innovative and damn crazy work mixing opposite influences. I don’t like all of the tracks although it was exciting listening.