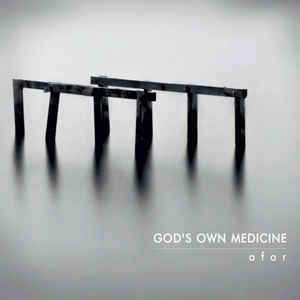 Background/Info: Polish formation God’s Own Medicine saw the light of day in 1998. I especially remember the band’s debut album “Retro” released in 1999 on Hypnobeat. “Afar” is their seventh full length and the first one released on Alchera Visions. Andrzej Turaj (also involved with Hidden By Ivy) remains the creative force of the band and got the help from several contributors (mainly guest singers) to accomplish this album.

Content: The least I can say is that the sound and influences of God’s Own Medicine have progressively evolved throughout the years. “Afar” is merging elements of rock- and new/cold-wave music, but I also noticed a flavor of psychedelia and even blues. The album is carried by the guitar playing and characterized by the different vocalists.

+ + + : The main strength of “Afar” clearly appears to be the guitar play. I especially like the passages reminding me of 80s melancholia, but some cuts are also revealing a psychedelic approach (cf. “Staring At The Sun”) while another tracks features a somewhat blues touch (cf. “Despair Was On My Tongue”). The songs are well-crafted and reveal a mature production process. I also have to say a word about the sober, but styled digipak format.

– – – : Some of the ‘softer’ cuts can’t really convince me, but the main noticeable aspect is that the original magic of this band is gone. God’s Own Medicine evolved in sound, walking on different sonic paths. I personally prefer their early work.

Conclusion: “Afar” is a very accessible and enjoyable piece of music, but without real highlights.