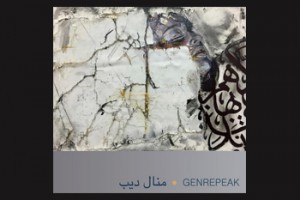 Content: I already had the opportunity to discover previous work of Genre Peak, but this newest opus is without a shadow of a doubt the one that I’ll keep in mind. Behind this American band is operating Martin Birke. He’s used to work with guest musicians and mainly singers. He now joined hands with Manal Deeb who’s a Palestinian American artist who has exposed his artwork all over the world.

“Fix Me Deeper” is inspired on an original artwork of Deeb, which is the front cover of this EP. Genre Peak composes a slow tempo driven sound with some epic and drama-like sound creation, which is pretty cinematographic-minded. The half spoken-like lyrics have been sung by Martin Birke and create a delicious match with the female, Arabian chants of Manal Deeb.

There also is a remix by Richard Barbieri, which is a fascinating trip through mysterious astral atmospheres carried by bombastic rhythms. This mix is pretty dark and a bit like a raw and unpolished version of a Massive Attack-song.

Both songs left are brilliant pieces as well. Birke seems to unleash his most sophisticated writing getting into pure IDM. I really love the sound sculptures and global production, which is brilliant.

“Portal Groove” is a great piece in the genre while “Egg’s First flight” is a little more into danceable vibes. The only regret I have about both songs is that they are a little bit too short and that’s especially because they are great pieces of intelligent electronic music.

Since you’re here … … we have a small favour to ask. More people are reading Side-Line Magazine than ever but advertising revenues across the media are falling fast. And unlike many news organisations, we haven’t put up a paywall – we want to keep our journalism as open as we can. So you can see why we need to ask for your help. Side-Line’s independent journalism takes a lot of time, money and hard work to produce. But we do it because we want to push the artists we like and who are equally fighting to survive. If everyone who reads our reporting, who likes it, helps fund it, our future would be much more secure. For as little as 5 US$, you can support Side-Line Magazine – and it only takes a minute. Thank you. The donations are safely powered by Paypal.
Tags: Genre Peak