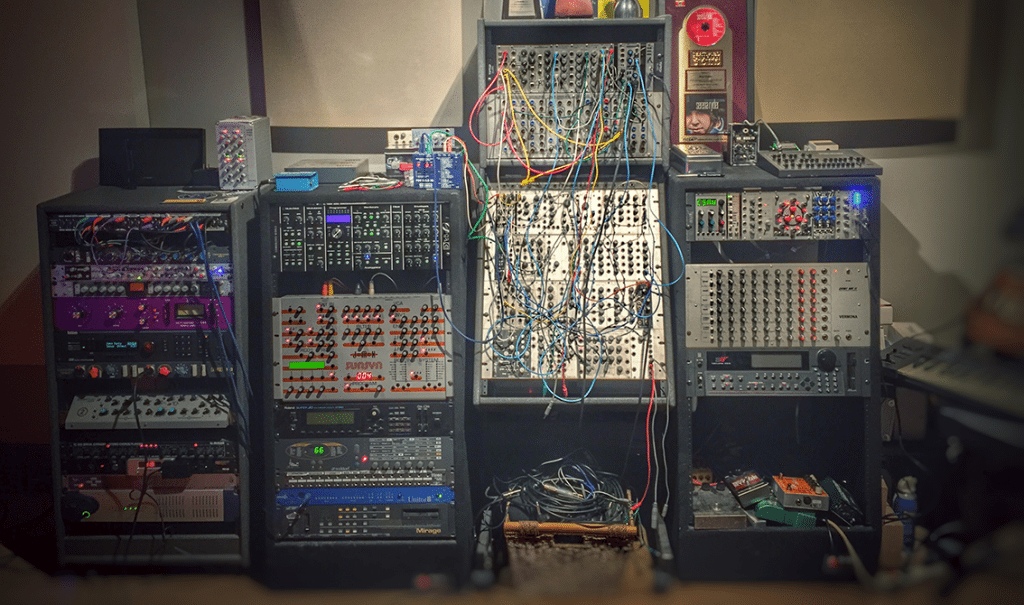 Front Line Assembly was founded in Vancouver (Canada) in 1986 by Bill Leeb, after he left Skinny Puppy. FLA is still one of the leading Electro-Industrial-EBM acts in the world and currently touring Europe, celebrating its 30 years existence! Open your technical mind with long-time member/engineer Rhys Fulber, also known as producer of Fear Factory, Cubanate, Paradise Lost, Youth Code, … and member of the projects Delerium, Conjure One, Will, Nailbomb and more!

RF: I was pretty serious about playing drums when I was young, then became interested in electronic music more when I was about 14. I started messing around with a friend’s Korg Poly 800 then my father got me a Roland Juno-106 soon after and it was all I did as a teenager from then on. MIDI was a fairly new thing at this time. I later sold it for two Sequential Circuits Pro-Ones, one of which I still have. I never understood the later appeal of the Roland Juno-106. I much preferred the sound of the Sequential Circuits Pro-One.

RF: I compose in Ableton Live and then record and mix in Pro Tools HD. I feel Pro Tools has the best sounding mix engine but I love the creative process with Ableton Live. Once you understand it, it’s a very quick and fluid environment.

RF: I have a rack of recording equipment – preamps, compressors, equalizers (SSL, Chandler..) then a few racks of synths. A good sized Eurorack modular system mixed with a Serge Modular panel, Jomox Sunsyn and XBase 09, Waldorf Q+ and Pulse+, Studio Electronics Omega 8, Nord Wave and Modular, Sequential Circuits Pro-One, Moog Minimoog, Korg MS-20 and VC-10, Roland Alpha Juno-2 and JD-990, Vermona DRM MkII, E-mu Emulator IV, Ensoniq Mirage (which I never use) and a bunch of effect pedals etc. The synth I use the most is the Studio Electronics Omega 8. It can cover pretty much anything synth wise and sounds great. The modular being a close second.

RF: I just redid my live set up. I use a MacBook Pro with a Focusrite Scarlett 4 running Ableton Live controlled by a Novation SL along with a Mutable Instruments Shruthi, Waldorf Rocket, Nord Wave and a TC Flashback4 delay with a Mackie mixer. I need to keep things compact for travel but have options. I like to be busy on stage.

RF: As far as impact on music as a whole I would say the Moog Minimoog. Its really not even close. The Fairlight CMI would be next then the Yamaha DX7 and ARP2600.

RF: I think as far as size of audience I would say Depeche Mode, Hans Zimmer and Jean Michel Jarre. I guess Daft Punk has to be added now too.

RF: In the ’90s I had lots of hitting the load button instead of the save button which meant three hours of sampling went down the drain but not too many things that severe. On one Front Line Assembly tour I had my monitors catch on fire once right beside my rack of gear. That was probably the most extreme and explains my tinnitus.

RF: I much prefer the sound of analog. The imperfections are what make it feel more musical and alive. I like the convenience of software as far as making music mobile but whenever possible I like to redo the sounds “by hand” so to speak. I feel its worth the extra effort and is more rewarding.

RF: No way. I think things are becoming easier. It’s much easier to get a laptop plug and play set up going now. The process of making electronic music is so much simpler and more streamlined than before. Maybe it’s complex to learn all the actual parameters of current software but I think very few people do. Everything comes with sounds and presets to get you going. Another reason why I like analog and having to make the sounds yourself from scratch, it makes it more individual.

RF: I think we are in it because the modular synth explosion of late shows people wanting to move backwards somewhat. Maybe soon you can run VST’s and proper DAW’s via IOS? That’s the only major change I can see right now.