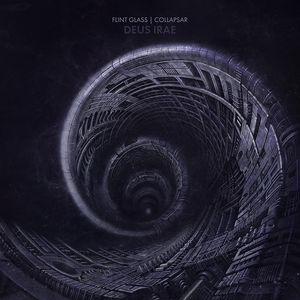 Content: “Deus Irae” resulted from the common efforts of Gwenn Trémorin (Flint Glass) and Thibaud Thaunay (Collapsar, Maculatum). Both French artists have not been very prolific during the past few years when it comes to release new music. They joined forces to accomplish this noticeable sonic trip inspired by the novel “God Of Wrath” written by Phillip K. Dick & Roger Zelasny.

It’s all about an apocalyptic voyage in search of the God of Wrath, which has been transposed by both musicians into a poignant and diversified musical voyage mainly characterized by two long duration compositions. Both tracks simply entitled “Servants Of Wrath” (part I & II) will hold you in their grip for nearly 50 minutes.

We enter a fascinating universe of freaky sound treatments mixed with aquatic sounds and other field recordings. It allows the visitor to explore an obscure and somewhat surreal universe, which progressively evolves towards harder industrial rhythms and overwhelming dark-ambient like sound waves. The visit becomes progressively more tormenting by the injection of hard, crashing sound treatments.

The music becomes more visual-like, which is an element reinforced at “Servants Of Wrath Part II”. This track sounds a bit harder and more into industrial influences, but it also reveals more complexity and industrial sound intelligence. The slow rhythm makes it fully accessible while some kind of breathing blasts again reinforce the feeling of horror. You feel the symbiosis of both artists coming through more strongly on this 2nd cut.

We next get 5 remixes of “Servants Of Wrath” although it’s more appropriated to speak about a real rework. Spherical Disrupted is the first band on the list accentuating the mysterious mood of the track while the industrial style sounds more like manipulated by an acid bath. It’s an interesting cut followed by a cool remix of Hologram.

One of the most noticeable remixes was accomplished by another French project. Sylvgheist Maëlström is a real genius when it comes to create outstanding sound treatments and that’s precisely what comes through on this remix. It sounds harder and totally industrial-like while getting closer to the spirit of Flint Glass. Ah Cama-Sotz did a great job as well accentuating the percussion parts while the ambient element gives this mix a dark shadow.

Last, but not least Iszoloscope brings this album to a great end reinforcing the rhythmic and the industrial components of the track. This version is more into tribal-industrial influences and comes closer to the usual work of Flint Glass as well.

Conclusion: “Deus Irae” stands for a great sonic symbiosis between two complementary bands plus several noticeable and intelligent remixes. This is the kind of collaboration I can only, but encourage to regroup for another release.