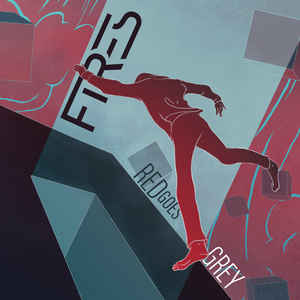 Background/Info: Fires is a new project set-up and driven by Eric Sochocki (Cryogen Second, Becoming The Devourer). The project was set-up in 2016 and immediately got  signed to Metropolis to unleash this debut album “Red Goes Grey”.

Content: Both opening cuts reveal great electronic treatments and powerful pop vibes. The sounds      are rather raw, creating a kind of evil pop approach. The upcoming songs progressively get quieter and carried by astral electronics and other psychedelic passages. The songs became moodier. I also noticed a powerful, instrumental song.

+ + + : The opening cuts are absolutely great. It’s not only about the dynamic running through the songs, but also the great sound treatments featuring an unexpected pop sound. Sochocki clearly took care to create noticeable sound treatments. I also like his psychedelic approach and even a few moody-like cuts. But my favorite song is the instrumental one (cf. “Follower”) for its impressive sound manipulations.

– – – : I was a bit disappointed with the contrast between the mind-blowing debut cuts and the rest of the tracklist, which is softer and moody-like. It gives you the impression of hearing different bands on one album; like a band in search of his true sound identity.

Conclusion: “Red Goes Grey” is switching from overwhelming, great songs towards more average-like cuts. I however think it’s a band to keep an eye on. A new opus with remixes has been already been released.