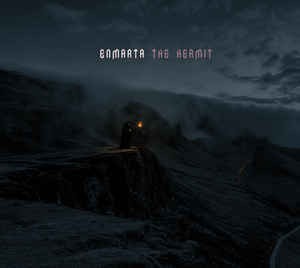 Background/Info: Late 2015 we discovered the official debut album of Enmarta. “Sea Of Black” revealed a promising dark-ambient sound mixed with viola. Sigfried (Der) Leiermann is back on track unleashing a new opus of 7 tracks.

Content: Enmarta claims that it ‘is the darkest tear in the deepest human frailty’. That’s a fascinating description of what sound can stand for. “The Hermit” moves on where “Sea Of Black” left off. The global production has been improved, resulting in poignant songs. The tracks have been progressively built up till a point where electro-frightening atmospheres have been joined by the beautiful sadness of viola. It injects an authentic feeling to the work, but also an exciting perfume of reverie.

Ambient music is made to dream away and when it concerns dark-ambient you have to imagine ‘horror’, which sounds like having been symbolized by monstrous, overwhelming sound treatments. The viola still adds a melancholic touch on top of the work. Numerous field recordings have been added as well, which was an ingredient on the debut work.

+ + + : Enmarta confirms the strong potential from the debut-album, but it also is a band with a unique approach in dark-ambient music. I like a band like Phonothek for the use of trumpet while Enmarta is using a viola. It creates an extra dimension, but also a very own sound-DNA making the difference with dark-ambient bands. The opening cuts are worthy of examination. There’s a subtle progression running through the songs, progressively joining a dark orgasmic apex. The viola creates an emotional touch and a perfect harmony with the dark electronic sound waves.

– – – : I can’t say that the second part of the work is bad, but it’s less convincing compared to the terrific debut cuts.

Conclusion: Dark-ambient music becomes beautiful and artistic when it’s composed by Enmarta. This new opus reveals a great progression in all of the elements that were already featured on “Sea Of Black”. I can’t wait to hear the next work.