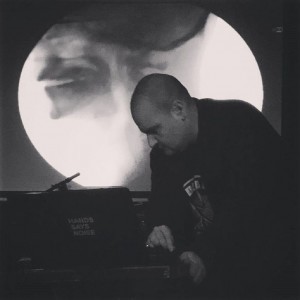 Cervello Elettronico is the sonic brainchild of David Christian. This solo-project started to get recognized right after the official debut-album “Negate The Instigator” released in 2007 on CrunchPod. This work revealed a fresh and progressive electro-industrial-trance sound, which got progressively improved all over the years. Cervello Elettronico is now mainly active on HANDS, which released the newest opus “Logical Fears”. I asked David a few questions about the past and the present.

Q: You next year will ‘celebrate’ the 10th anniversary of your official debut-album “Negate The Instigator” released on CrunchPod! What did this album evoke to you and what has been the importance of this work on your career?

David: I have not listened to “Negate The Iinstigator” since about 3 or 4 years ago when I got back the licensing and put it up on Bandcamp. I’m proud of the ideas, but not the production on that album. Maybe one day I can go back and rework things, but that won’t be for a while. I prefer to move forward.

It was an important album to me in the learning process of song writing. Before “Negate The Iinstigator” I would just mess around for hours and edited whatever worthwhile material came out of it to make songs. The finished product was nothing like I originally imagined, which can be a good or bad thing.

When I wrote “Negate The Iinstigator” I started to hear music in my head and then try to replicate it with samples and synths. This is mainly how I work today. The end result is usually half way accurate, but It’s gotten more spot on over time. Feedback from the release was also very helpful. It held a mirror up to my project and helped me realize what aspects people liked, where I was, and how to grow and be where I wanted to be. The label had a following so exposure is always good.

Q: So is the production process the main change/evolution from “Negate The Instigator” towards your newest album “Logical Fears”?

David: Recording “Negate The Iinstigator” was like driving with a blindfold on, but now I know exactly where to go with this project. It all had to do with being truthful to myself as an artist and defining my path. There were just so many influences during the first two albums pulling in different directions and you can hear the chaos. Rhythmic-noise, EBM, electro, electronica, trance. It probably had to do with lack of confidence. I’m more confident about writing now.

I think a lot of newer artists in the mid to late 2000’s had this same problem. They tried to mimic successful artists in the scene and don’t have an identity. A world full of Combichrist- and Suicide Commando clones made music very boring. With my last few releases I’ve committed to one direction and it feels comfortable in my skin. I feel like Logical Fears is my best released album to date because of this. The next one will be honest as well and sound even harder.

Q: What kind of album did you had in mind when starting the writing of “Logical Fears”?

David: I wanted to make a political album without pushing an agenda. It’s difficult to avoid the topic of politics this year especially if you live in America. It’s an ultra provocative topic. Tension was high because of the election. Families and friends were torn apart. I just wanted to put up a mirror against all that was going on and show distortion. People are afraid of fear right now and the anxiety is piling up. But I feel it’s out of place for this particular project to take any political stance (with exception against racism or for human rights). Free will and not my songs or words will decide our fate. I am not turning Cervello Elettronico exclusively into a political act. There are enough artists that do that already.

I also wanted the hardest most abrasive sounding album I’ve ever recorded. I started out with the noisy rhythms and distorted percussions and worked my way backwards from there. I’ve also learned that there is  gravity and sort of centrifugal force to sounds. That helps keep music balanced. I think it’s a good idea to keep an open mind about the process and not be afraid to try new things. Since joining the HANDS label I have so many impressive peers I feel like I need to push my limits to keep up.

Q: I’ve been always fascinated by your sound creation, which has a kind of very personal sound-DNA. How do you proceed to create your sounds and do you’ve some references?

David: I like to sample sounds that are relevant to the topic of the song and twist them. For “Logical Fears” I lifted sound bites from the media of American presidential candidates and attributed them to certain political issues or publicity tactics. For “Tone Deaf” I heard Ted Cruz (failed presidential nominee) singing really poorly for votes and thought that was a perfect example of shameless publicity. The next best thing to kissing a baby (which you can’t really sample). I had to include that in “Logical Fears”.

I also work at an airport and like to sample my work environment. There’s lots of mechanical inspiration around me there. Then of course if there’s an idea in my head for a sound I just build it from scratch. I think like most designers I make sound in layers. There’s a superficial sound and it’s processed and paired with another meaty sound or eq’d to fit a piece of the puzzle. It’s all boring technical stuff, but fun to certain people like me.

Q: I noticed more and more ‘industrial’ bands are experimenting with ‘techno’ music, the bridge between both styles becoming sometimes pretty close! How do you explain this evolution and what has been the impact of techno music on your sound?

David: It’s less of an evolution and more like a renaissance. I think Industrial music had lost its way becoming what it was meant to counter, but now it’s returning full circle. Besides the techno influence it’s gotten more experimental and provocative again. Techno has been a huge influence on my recent style and I have old friends like Adam X to thank for that. Also living in Los Angeles changed my sound. Just like Berlin, L.A is a hot spot for this kind of music. “Droid Behavior”-parties are where to go if you want to hear Orphx, Perc, or Rrose. This is the real industrial music right now to me.

Since you’re here … … we have a small favour to ask. More people are reading Side-Line Magazine than ever but advertising revenues across the media are falling fast. And unlike many news organisations, we haven’t put up a paywall – we want to keep our journalism as open as we can. So you can see why we need to ask for your help. Side-Line’s independent journalism takes a lot of time, money and hard work to produce. But we do it because we want to push the artists we like and who are equally fighting to survive. If everyone who reads our reporting, who likes it, helps fund it, our future would be much more secure. For as little as 5 US$, you can support Side-Line Magazine – and it only takes a minute. Thank you. The donations are safely powered by Paypal.
Tags: Berlin, Cervello Elettronico, EBM, Orphx