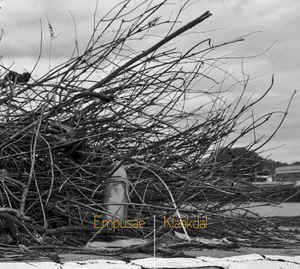 Background/Info: This album is something really unique. It’s a split album between recognized and established dark-ambient, tribal and experimental artist Nicolas Van Meirhaeghe (aka Sal-Ocin) better known as Empusae and Klankdal, which is another Belgian formation consisting of Glenn Dick and Sebastien Crusener. It also is a collaboration between Belgian labels Consouling Sounds and Wool-E Disc. We already know Wool-E Tapes (cassette label), but this is the debut CD of Wool-E Discs. The common element between artists and labels is that they’re all from Ghent. This album got officially presented during the opening day of a big annual town festival that happens in Ghent.

Content: Empusae has been featured with 3 tracks revealing a kind of soundscape approach composed by evasive guitar playing and a few percussion parts. A few sounds have been used, but it creates an anguishing and somewhat paranoid atmosphere with some drones resonating in the background. Sal-Ocin also invites the listener to join in for a Halloween-like trip created by piano playing and progressively joined by somewhat industrial-dubby rhythms.

Klankdal is definitely more experimental and into the purest soundscape genre. Their composed a single piece (that was recorded live) that will hold you in its grip for nearly 30 minutes. It’s pretty abstract and accomplished by numerous field recordings. The sound remains dark and is supported with an ominous atmosphere.

+ + + : I like the concept of this release featuring people from the same town. It also is an opportunity to discover the rather unknown Klankdal (which previously released a cassette on Wool-E Tapes) while Empusae takes his fans by surprise unleashing a quite diversified piece of music. I especially like the last cut “The Woods Have Eyes” driven by a great cadence and a mysterious piano playing.

– – – : This is definitely not the best work I’ve heard from Empusae while this single cut of Klankdal is not exactly setting the world on fire.

Conclusion: You probably will be intrigued to discover new work by Empusae, which will also give you the opportunity to discover a new band from the Belgian experimental music fields.

Best songs: “The Woods Have Eyes”.